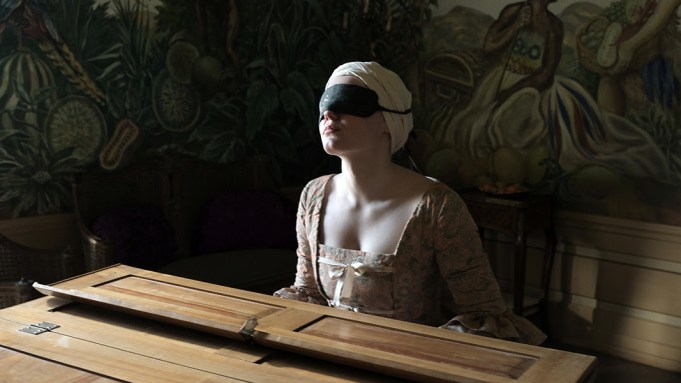 Barbara Albert, whose films have competed at Locarno, San Sebastián and Venice, is headed to Toronto with her latest feature, “Mademoiselle Paradis.” In anticipation of the film’s Toronto Festival world premiere, Variety has been given an exclusive clip from the film.

International sales for the film are handled by Films Distribution. Co-produced by German company Looks Film & TV and Austria’s Nikolaus Geyrhalter Filmproduktion, “Mademoiselle Paradis,” is based on the 2012 novelization of a true story by German writer and artist Alissa Walser. The screenplay adaptation was penned by Austrian actress and writer Kathrin Resetarits.

A late 18th century period piece, “Mademoiselle Paradis,” tells the tale of a blind aristocratic piano player, and the unique relationship she shared with her physician. After a lifetime of experimental treatments, Therese Paradis first begins to see results when treated by the controversial Dr. Franz Mesmer.

The two develop a respect and friendship as the doctor helps Therese adjust to seeing the world for the first time. Many of Therese’s former doctors and other Austrian medical professionals are skeptical of the doctors methods and refute any positive results as purely psychosomatic. But as her vision returns, her skills as a pianist deteriorate and Therese is forced to question if loosing the one thing that makes her exceptional is worth regaining her ability to see.

In the exclusive clip, we see the title-character Therese, played by 2014 Berlinale Shooting Star winner Maria-Victoria Dragus, struggling with the fact that her newfound sight doesn’t come with the ability to process what it is she is seeing. Therese says she thought that the images she developed in her mind would be like hearing music when she is away from her piano. Doctor Mesmer explains the difference is that the music is real, while the images in her head were only apparitions. Finally, Therese is seen exploring the rich artwork of the doctor’s home, as much with her hands as her eyes.

According to Albert, “’Mademoiselle Paradis,’ tells the tale of a social system based on prohibitions and repression, and of “women who try to come to terms with it and find their own space and freedom within its restrictive structures.”

“Mademoiselle Paradis” marks Albert’s first time directing of a script someone else wrote. That was a liberating experience, she told Variety: ”It seems to be a paradox, but somehow I felt extremely creative within the corset of the novel and the screenplay, and it doesn’t hurt as much, if you have to cut a scene or leave it in the editing room.”

Having been an actress, editor, writer and director, Albert also addressed where she would like to go from here.

“More than ever I feel like a director and want to really concentrate on that part of filmmaking,” she said, adding that after the experience of “Mademoiselle Paradis,” she was “much more open for projects written by other screenwriters.”

Albert is currently  working on different kinds of projects right now, she said. One is an adaptation, the other a series, a supernatural mystery thriller.