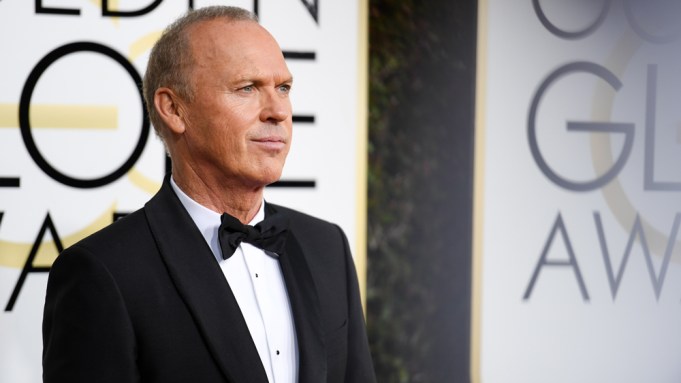 Among his many accomplishments, Michael Keaton has the rare distinction of starring in back-to-back best picture Oscar winners with “Birdman” and “Spotlight.” He is currently on screens now in “The Founder,” directed by John Lee Hancock (“Saving Mr. Banks,” “The Blind Side”) and written by Robert D. Siegel (“The Wrestler.”)

The film tells the story of Ray Kroc, who went from selling milkshake machines to franchising McDonald’s restaurants and creating the fast food empire we know today. Up next, the former “Batman” star will switch sides to play bad guy Vulture in “Spider-Man: Homecoming” and appear in Michael Cuesta’s “American Assassin.”

Did you know the story of Ray Kroc or even the name Ray Kroc before this script came to you?
I knew the name Ray Kroc, and it’s one of those things you kind of know by osmosis. McDonald’s is so omnipresent and ubiquitous, it’s woven into the fabric. When one would walk up to someone and say, “Ray Kroc, who is that?” I’d go, “He started it or, he was a guy who …” and then you kind of go, “I’m not sure I really know much.” Then, when you start to learn about it, which I did and had to do, there was so much I didn’t know, and I really didn’t know there were McDonald’s brothers, their story is so interesting. That story alone is so interesting.

And Ray was a divisive figure.
Ray was more than a divisive figure. Ray was the following: great, ambitious, authentic, pull yourself up by your bootstraps guy, quintessential American go-getter, and almost sadistic in the end in his terms of what he brought down on the brothers. I mean, cold hearted and brutal. That for an actor, or for me anyway, makes it really interesting, because the front half of Ray, I dig.

I respect his work and I think this was not a guy who was given anything, he went out and got it himself. He brought people in. Kind of turns his back on his country club friends. (In the film there’s a scene with) a guy selling bibles, I think he’s doing it on a weekend or something. He tells him his name and Ray says, “Are you Jewish?” He goes, “Yeah.” Ray goes, “I like this guy. Come work for me.” I just really like that about him. Then, when the greed gets deep, not so much. The movie had so much to say about the American free enterprise system and capitalism and America, and for me, even immigration.

You’ve played real people before, such as Robby Robinson in “Spotlight.” And you actually did spend time with him?
That’s a case where I was with him and he was right there to say, “Hey, what happened when this went down?” Or, “How do you say that again?” That was great to have. I mean, I could go days and days, where we’re just mostly talking about life or what’s going on politically, or life, you know, and then there were times where I really needed his assistance, and we’re pals.

In the case of Ray Kroc, who passed away in 1984, you obviously didn’t have that. So where did you start?
Really, from what John started to tell me and what the writer had given me. I watched a documentary on Ray and I wasn’t into it long — seven or eight minutes — and I went, “I got it.” It’s not like, “Oh, I got it, I understand everything.” It was that I locked into what I thought the essence of the guy was. It immediately put me on the general highway.

Then I had to narrow it down, and narrow it down and winnow it down, and get into the details. You never do an impression, and yet I felt somewhat obligated to kind of simulate his attitude and his sound. You know, that Illinois-ish, not quite Chicago-ish Midwest kind of thing. Then once you start looking in his wardrobe and then you start to put on the wardrobe.

We’ve established Ray wasn’t always the nicest guy, and you and John were committed to showing that.
I said to him, “You know, if we’re going to either wink or at the end of the movie go, he (wasn’t all that bad), I’m really not interested. Let’s tell the truth, let’s tell the story.” I wasn’t interested in having it –I hate to use an overly-used word, but sugar-coated. And neither was John.

I do think though, in all your roles, you bring an inherent likability, whether you want to or not. It’s been a while since you played a truly villainous role.
Yeah, Vulture, recently. But not to give too much away, but interestingly, he is and he isn’t, that character. He’s a really interesting — and more interesting than I thought — villain because there’s parts of him that you go, “You know what? I might see his point.” Really, really. It makes it interesting to play.

Was there any hesitation, because you had done Batman, going back into the superhero universe?
No, I mean, not at all. It’s just a thing. A gig. I don’t mean it’s just a gig, it’s the next job. And you think you can do it or want to do it and in fact I said no, because I couldn’t, it didn’t work in my schedule. Then I’m glad to say, they kind of shifted the scheduling and it worked out. So it fit in and I’m glad I did it.

Ray was a complex guy, but he did do a lot of good, as well. And his wife did even more good when she inherited the dough after.
You know, Joan Kroc is responsible for getting NPR an awful lot of money and the Salvation Army and other really good causes. I really admire the front half of Ray Kroc. Hardworking guy, man. And then ambitious and drive and enthusiasm and sense of humor.

John and I were talking about it recently and I said, “You know, this has elements of Billy Wilder.” I’ve since heard that. You look at the great Billy Wilder and his movies and you’re going, “God that’s good and refreshing and snappy and great filmmaking.” Then you go, you start thinking about what just happened. He had these layers; he had movies, different movies where it’s been revealed that he had alternative endings that were dark, and he wasn’t afraid of that. He was so smart. Without maybe giving this movie too much credit, it definitely has, some parts of it feel real Wilder-ish to me.

Well, I’m going to spoil it right now for the audience and let them know that McDonald’s becomes wildly successful. So, sorry.
Yeah. Spoiler alert.