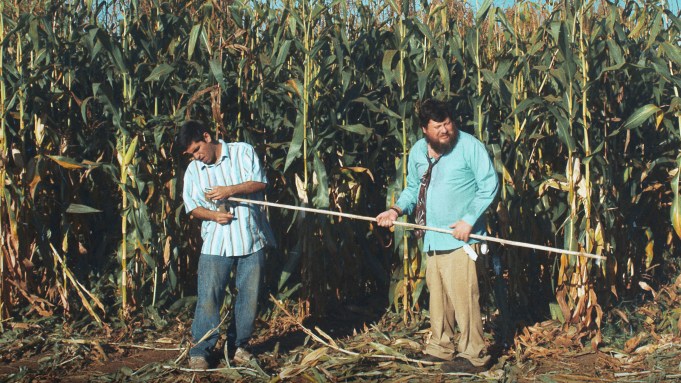 Tomás Alzamora, perhaps better known as DJ FourD, has stepped out from behind the turntables in Chile and picked up a camera for his directorial debut, “Little White Lie.” The film’s lead producer Pablo Calisto worked with Alzamora previously on the Clermont-Ferrand International Competition winner, “The Simple Things.” The two partner at Santiago-based production company Equeco, a company which shares Alzamora’s musical roots, having started out making videos that dub themselves “New Young Chilean Cinema.”

World premiering March 8 at the Miami Festival, in Chile the film will be distributed by Storyboard Media, bowing in June. Equeco will be in Miami looking to secure an international sale agent.

“Little White Lie” tells the story of a struggling local newspaper’s hapless editor, Edgardo, who takes a somewhat loose interpretation of Benjamin Franklin’s advice that one should “Either write something worth reading, or do something worth writing.” Struggling to sell ad space and find news worth printing and desperate to keep his job and that of his co-workers, in a traumatic moment of inspiration, he decides that perhaps creating fake news is the way to go. Things quickly get out of hand for the two, and the owner of the paper and local burgher Don Fabián sees an opportunity to grow his wealth and political influence after realizing what the two are up to.

Although not a true story, “Little White Lie” is based on real experiences from first-time director Alzamora’s past. Born in a small village with no cinema theater nor shopping centers, Alzamora and his friends were forced to create their own experiences, and create they did.

“The film is inspired by the story of a friend who worked in the local newspaper in my hometown, where the same thing happened: there was not enough content for daily editions, so he invented it,” reflected Alzamora. “Many times he had asked us, his friends, to give false statements and interviews; then the next day we saw our declarations (printed) in the newspaper.”

The film is part-social commentary, part-black comedy and part-fantasy, forcing the audience to constantly reevaluate whether what they are seeing is true or not. It also features a soundtrack of classic Latin American songs which lend a further impression of authenticity.

Among others, the cast includes veteran comedian and TV actor Rodrigo Salinas and Catalina Saavedra who took home awards from festivals around the world, including best actress at Sundance, for her performance in 2009’s Golden Globe-nominated “The Maid.” “Saavedra is riveting as a servant whose unblinking focus on her routine masks a profound loneliness,” Variety said of Saavedra’s turn in that film.

Alzamora fielded questions for Variety about the film, and his past and possible future while also giving exclusive access to the recently completed trailer.

“Little White Lie” is clearly a social issue film but it’s not a drama, why did you decide to make it dark comedy?

The humor was present from the beginning ever since I heard the story on which it is based, and it became the driving emotional force that helped me to write the story. In the process, I realized that

the story had much deeper social issues, but I didn’t have to change the tone. I could not have told it in any other way. It’s my humor, it’s what I like and it’s what makes me laugh.

Does this sort of exploitation happen a lot in Chile, and do you think this story is relatable in other places or under other circumstances?

It exists. At local and national level. The management and the use of confidential information is a current and very real problem in our country. We don’t have to go far. One case recently exploded

that involved the president’s son. The powerful are roaming free and the powerless have to pay. Here in Chile, if you have a good last name or good contacts all is fine, otherwise you are doomed.

“Little White Lie” is a film that doesn’t fit neatly into any one genre, so what were some of your influences when making this film?

In the Chilean cinema, there is a very deep abyss between arthouse and commercial films. There’s nothing in the middle. I liked the idea of making something entertaining but talking directly with clear social criticism and touching on current issues. It’s a film without prejudices and fears, in which I could put everything that I liked. It has a lot from the world of the Coen brothers, or, for example, from Tarantino’s collages.

The film is full of very popular but dated Latin American classic songs. Why did you go that way with the soundtrack to a film set in 2016?

Since I was little, I stole “samples” from old songs to make my beats. I don’t know how to compose, so I had to recycle it. That’s how I realized that the old analog sound is unique. Later, I became a D.J. and a lover of the acetate recordings, of tapes and all these sounds and textures that modern music doesn’t give us. In fact, all the music made for the film was processed analogically in order to have this texture.

The story is very character-driven. You need strong actors to pull that off. There is a tradition in Chile of using theater actors for films,. Was that true of this film?

Achieving this was one of the biggest challenges of the film… On one hand we had Catalina Saavedra, Daniel Antivilo and Ernesto Meléndez who come from the theater world, with impressive careers and outstanding reputations. But on the other hand we had Rodrigo, who is a comedian and comes from a television world, accustomed to another language. This was a complete turn in his career, and it was a bet to be able to unite both worlds. We knew that the tone of the film had to be sustained with solid and realistic performances, and we are very happy with the result.

It could be argued that there is a new generation of Chilean filmmakers and that you would have to be considered a part of that group now. Can you identify any characteristics unique to that group?

I believe that we are a generation without fears, and with many tools, but above all with a great desire to make movies, with or without money, no matter what other people might say. There is a young creative and humble force that is also linked by friendship: We help each other in editing, we discuss ideas among directors. I believe there is more unity, at least that’s how we see it since we made our film only with friends, from the musicians, the poster, the script, the crew, etc. It’s all based on love and collective support.

What are you looking to do next? Do you have any projects in the works?

I’m currently developing different ideas, always along the same line: black comedy, I love this genre. I have two features in development, one to be shot in a pizza place in the U.S. and the other on Haiti’s smallest island. At the same time, I also want to open my own cheese factory.