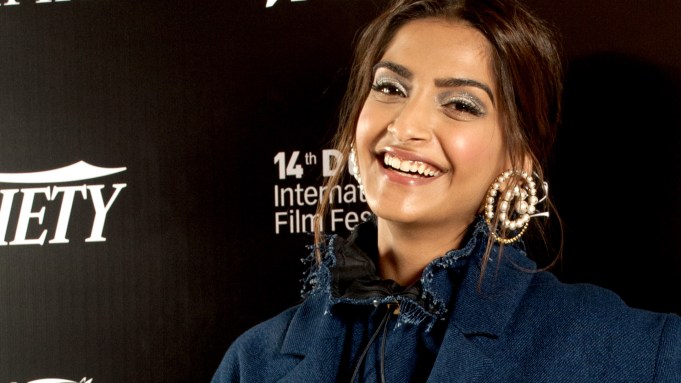 In a Variety Studio interview at the Dubai Intl. Film Festival, Bollywood star Sonam Kapoor said it was a good time for creating art, but a “difficult” time for society.

“In India, as in the rest of the world, we are going through a period that is very tentative, politically, socially, and in every way,” she said. “Unfortunately, or fortunately, it is the best time for art because the best kind of work and the best kind of art comes out from difficult times, and that’s why we have such amazing films being made, and hopefully the trend will follow all over the world.”

She said the movies she makes are both entertaining and have “something to say.”

In 2014 Disney hit “Khoobsurat” she played a “wannabe princess.” “Not a real princess like the stereotypical princess that we all grew up with. It’s a new kind of princess who takes charge, who is the hero of the story, and there is no knight in shining armor taking hold of her. And that’s why I guess the film resonated with young girls.”

She has reunited with the director of “Khoobsurat,” Shashanka Ghosh, on the upcoming “Veere Di Wedding.” “[Ghosh] is great with comedy and drama — a dramedy is the best way to look at it. Four women coming of age — four best friends. It’s a very real film,” she said. “It’s not a ‘U’ film and I’m very excited because India and the world should know that women can make cinema that is entertaining and can say something and that can be commercially viable as well.”

Kapoor said she is set to appear in two adaptations of novels by Anuja Chauhan, “Battle for Bittora,” which is being scripted, and “The Zoya Factor.” “I keep making jokes about Anuja. I think she writes the characters for me,” Kapoor says. “They are very strong female leads.”

“‘The Zoya Factor’ is about this girl who becomes the lucky mascot for the Indian cricket team — in India cricket is like a religion,” she said. “It’s an interesting, fun film, and I’m excited to be part of the story.”

She added: “It’s really nice to be entertained in a way that you don’t have to think much. That’s why you have superhero films. But sometimes people want to go and be entertained and actually believe in something and these films are that: They are entertaining but they have a story to tell. They involve the audience, and it’s something I think that people should consume right now.”

Kapoor is very selective about the projects she boards. “Anything that makes me grow is something that I will select,” she said. “Otherwise there is no point. Otherwise you get stagnated as an artist and as a humanbeing.”

Kapoor said her family’s production company, Anil Kapoor Films Company, had a strong slate, which included a show for Amazon, more films, and a remake of “Modern Family” for India. They hope to make a third season of “24.”

Kapoor is an IWC brand ambassador and was in Dubai for the IWC Filmmaker Award.

Naman Ramachandran contributed to this article.