Alejandro G. Inarritu on Mindfulness Documentary ‘Walk With Me’ (EXCLUSIVE) 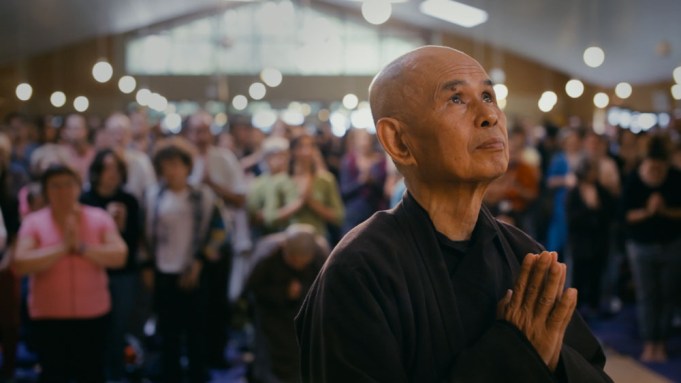 Oscar-winning director Alejandro G. Inarritu has spoken exclusively to Variety about his support for documentary “Walk With Me,” about mindfulness advocate and Zen Buddhist master Thich Nhat Hanh. The film, narrated by Benedict Cumberbatch, has its world premiere on Sunday at SXSW.

The movie, directed by Marc J. Francis and Max Pugh, was filmed over three years at Thich Nhat Hanh’s Plum Village monastery in France, and traveling with him on the road in the U.S. An exclusive first look at the international poster, released by sales company WestEnd Films, is shown below.

Inarritu, who won Oscars for “The Revenant” and “Birdman,” describes the documentary as “silent and pure,” containing “images and sound that translate the forgotten conciseness, [putting it] right there on the screen.”

Inarritu says: “I loved how [the filmmakers] capture and convey, cinematically, the sometimes inexplicable state of being awakened. It gives a hint of that quiet voice so underrated today and ironically so needed in this time of fear and ignorance.”

Inarritu describes Thich Nhat Hanh as “one of the deepest and wisest” people in the world. He adds that he attended a 21-day retreat at Plum Village in the presence of the Buddhist master. “I was very lucky. Among many things, he discussed with two Nobel Prize-winning [quantum physicists] about the conciseness of reality and the silent beauty of the awareness of it. It was just liberating and stunning.”

Inarritu says he tries to practice mindfulness every day and “to be diligent about it.” He adds that “more than helps, I think it transforms. I just want to express my enthusiasm for it. I truly believe that Thich Nhat Hanh is one of the most intelligent persons alive. His spiritual wisdom and scientific knowledge is this unique blend of quantum physics and Buddhist tradition.”