Hugh Jackman and Willem Dafoe on Acting Alongside ‘Incredible Kids’ 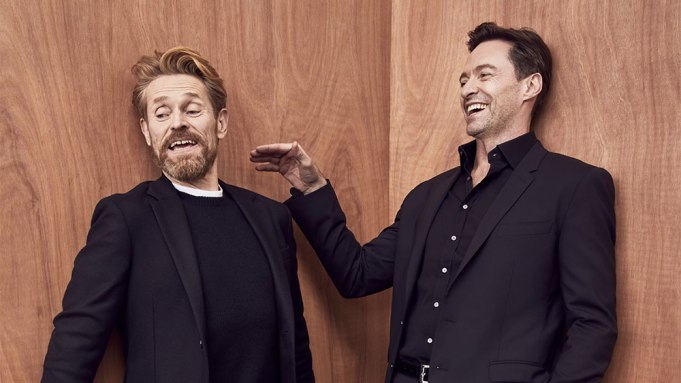 Hugh Jackman (“Logan”) and Willem Dafoe (“The Florida Project”) sat down for a chat for Variety’s “Actors on Actors” presented by Google Home, which will air from Jan. 2 to Jan. 4 on PBS SoCal KOCE.

Willem Dafoe: And the girl in yours —

Jackman: Dafne Keen. Both her parents in the business. They are amazing. They’re theater folk, so there’s no sense of having an on-set kid with stage parents; they really understand the process. [James Mangold] came up with the idea of making a movie about family. That’s the thing that terrifies Logan the most — love and intimacy and the ramifications of what that is, the pain it can bring. So having this unwanted daughter … I said, “Jim, I love the idea of it. I don’t think we’re going to find someone. I think you’re backing yourself into a corner here, because you have to believe that this 11-year-old girl has the ferocity and DNA of violence within.”

Dafoe: And you found her. She’s scarier than you are!

Jackman: Unbelievable. The stillness, the ferocity — honestly when we did the [fights], I had bruises on my arm after the rehearsal. But she’s an amazing young girl, and her performance is astonishing to me. As when I watched yours: It’s been a long time since I’ve seen a movie with that sense of freedom amongst the kids, that sense of play. The range emotionally is incredible. How did [director] Sean [Baker] find them?

Dafoe: Sean is fantastic with making those kids feel comfortable. Brooklynn [Prince] in particular has real skills; she has really strong instincts. She’s smart; she’s clever; she can invent things. The other kids, it was very key for Sean to make them feel like they were playing, give them things that they like to do. He worked with nontraditional casting, there were a lot of people — the majority had never made a movie before. Which was fantastic for me, because it was like they didn’t have anything to compare it to, and they were all turned on. It was like the beauty of beginners, without any anxiety. And Sean set them up so beautifully that these kids played, so they were children and they were inventive like children are. They could be chaotic like children are.

Jackman: The cast was amazing.

Dafoe: It’s been a long run for this Wolverine character.

Jackman: Seventeen years. Crazy, right? I had no idea. I remember finishing the first movie, and a friend of mine, a player in Hollywood, he goes, “Dude, I’ve heard not very good things about the movie; you really should book something else before it comes out.” There was about a four-month gap. He goes, “Just make sure you’ve got something else because when it comes out, you’re back down at the bottom of the pile again.”

Dafoe: Is this guy still a friend?

Jackman: Still a friend. Happily, he was wrong. No one really knew. There was no comic-book genre; comic-book movies were really not around at the time. This was 2000.

Dafoe: One thing I remember, when “Spider-Man” was proposed to me, it was like, “Really, you’re gonna make a movie from a comic book?” It was like I was slumming it. I didn’t see it that way, but some people were like, “Really?”

Jackman: It was a great movie, “Spider-Man.” I think “X-Men” did a lot, particularly when it opened up in a concentration camp, and the idea that we were taking it seriously in terms of more humanistic rather than just superhuman. Then I think [Christopher] Nolan raised the bar … and made people see beyond genre. It’s not just a genre film. They’ve continued to really surprise and entertain and be very different. You have something like “Deadpool” last year, “Logan” … I think studios are taking risks and doing different things. I have no idea how long it will last. You’re about to do another one, right?

Dafoe: I did “Aquaman.” In Australia, by the way.

Jackman: We’ve got a lot of water down there.

Dafoe: It was James Wan, a very strong director, and great fun, because I still like to do all the action stuff.

Jackman: I do too. I see it as dance.

Jackman: We’re doing a musical, man, come on. What do you think? You can play Fred Astaire or Gene Kelly.

Dafoe: I could do Ginger too.