Twenty years after its release, “Titanic” is still widely regarded as one of the great romances of all time. Centered around the love story between Kate Winslet’s Rose and Leonardo DiCaprio’s Jack aboard the ship’s ill-fated maiden voyage, James Cameron’s colossal blockbuster can make even the coldest of hearts melt… unless you’re talking about Cal Hockley.

Just as Rose and Jack were easy to love, the pretentious heir to a steel fortune, Caledon Nathan Hockley, was easy to hate.

Billy Zane, who played Rose’s villainous fiancé, credits Cal’s misogyny to the patriarchy, calling it a reflection of the times. And while Zane, like Rose, shares the opinion that Cal is an “unimaginable bastard,” he can’t help but empathize with his character on some level. “He’s a romantic!” Zane says.

On the 20th anniversary of the movie’s release, Zane spoke with Variety about his iconic role, the film’s lasting cultural impact, and of course, whether or not Jack and Rose could have both fit on that door.

What do you remember about working with Kate Winslet and Leonardo DiCaprio?

Just how wonderfully gifted and grounded they were, clearly seeing what the future held for both of them.

We’re close. More so with Leo, just based on frequency and living in the same city. Kate I don’t see as often, but it’s always lovely when we do catch up. We’re pals. I support his efforts, he mine. That was a wonderful bonding experience for the entire cast and crew. Everyone still maintains a great kinship. I was on the phone last night with Frances Fisher [who played Rose’s mother, Ruth Dewitt Bukater]. We all were brought very close by the experience.

Was there something specific about the experience that fostered these friendships?

The sheer length of the gig, the scope, the fact that we were witness to a number of firsts in terms of the execution. These were unifying moments.

Do you guys quote the movie when you’re together?

Never [laughs]. We don’t even talk about the movie.

That makes sense. There aren’t many notable lines to reference anyway.

Are you being facetious?

Let’s just say if their experience is anything like mine, you hear them regularly from the general public and friends. There’s no danger of those lines and moments ever leaving the zeitgeist. It doesn’t really need reinforcement from us.

That’s fair. What was James Cameron like as a director?

He was efficient. He’s an excellent director. He’s an excellent man. My experience was a pleasure, an education, crackled with camaraderie and comedy and mutual respect. I can only speak for myself, but I appreciated his personal commitment to excellence. He was as hard on himself as he was on anybody. I don’t want to say he was hard on anybody, he was doing the job to the best of his ability. If people thought that was difficult, I don’t know what they signed up for. 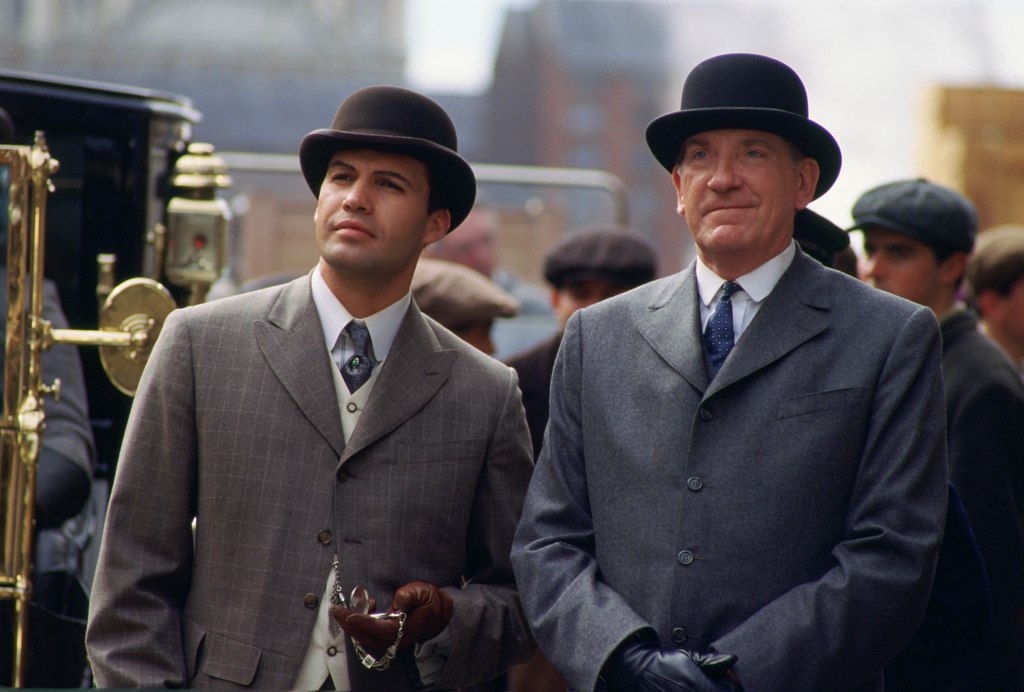 How did the movie change your life?

It became a tremendous international calling card. At times, curious, being synonymous with a universally loathed character and was the source of a lot of humor. That was tempered by great admiration. It’s the gift that keeps giving. It’s a phenomenal thing to be part of something so significant. Wonderful films being produced every year, worthy of being cemented in our collective minds as pillars of cinematic excellence, but for some reason, this picture resonates so deeply with people. That has always been a great privilege.

Why do you think it still resonates so strongly with audiences?

You can’t remove the context from this point. This was pre-smartphone, pre a lot of social media. Something about this impacted a right of passage for young men and women while still mining emotions in some audience members who could have grown a little jaded over time. It shook people up.

James Cameron has said he was worried about the movie failing. Was that ever a concern of yours?

Not mine. I guess I didn’t have as much on the line. We felt we were making a really good movie. You can only be as confident and hopeful that what you’re making retains and resonates. From a fiscal lens, I couldn’t imagine the pressures they were under.

Do you think Cal gets a bad rap?

Yes, and rightfully so. He was a bastard. But he wasn’t born that way, he was trained that way, in my opinion. He was a tragic bastard in that it was just bad programming. And a mirror of the times. He has his own strange tragedy and comeuppance as a result. Just was not equipped to handle a fiercely independent woman who was breaking social norms. His heart was really broken. He really loved and provided for her. Through the context of history, he wasn’t programmed by certain behaviors. It was definitely a patriarchy, a slightly oppressive one, but he was a romantic! He was trying to provide and give and get love and was offended and made to look a fool. It broke his heart, and it pissed him off [laughs].

Was he misunderstood at all?

I know he loved her deeply and really cared for Rose and couldn’t understand why she was being so petulant, to him, seemingly selfish. This isn’t me, this is the character talking. That’s what I thought his perspective was. I think he was treated fairly by the audiences because that was the point!

Do you think Cal and Rose’s relationship would have played out differently if this took place in 2017?

Of course. All of his behavior was a sign of the times. It wouldn’t register, I don’t think one would act out the way he does publicly. His actions and perspective and world view was informed by the world at that time.

What kind of reactions do you get from fans?

I get quoted. “I put the diamond in the coat, and I put the coat on her!” I get that a lot. “You unimaginable bastard.” A variety of curious greetings. My favorite are fairly off color, and I dare not mention. To be universally loathed is really quite funny.

What question do you get asked most about the movie?

It’s not really questions as much as comments.

Nobody asks you if you think Jack and Rose could have both fit on the door?

Oh, I get the door question. From a point of physics, sure. From a perspective of the times and that level of chivalry, I’m not surprised. I don’t think this door issue was intended [laughs]. Somewhere between the art department and the camera department it might have photographed bigger than it was. I think the fact that Jack tried to ensure that the least amount of freezing water touch her skin, which was the case by not jumping on it, preserved her and saved her. That was the idea. If he went up there, it would have swamped them.

Did you have any of the PCP-laced clam chowder on set?

No, that was Nova Scotia where they were filming the modern day sequences. We were filming in Mexico. Curiously, the food poisoning happened in Canada [laughs].