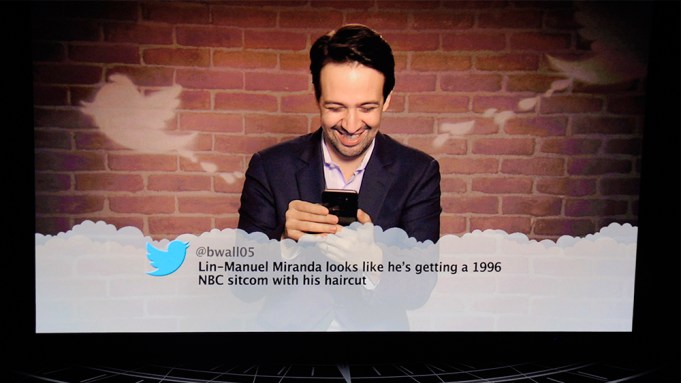 “Celebrities Read Mean Tweets” just got an Oscars edition. During the ceremony, a pre-recorded “Jimmy Kimmel Live!” segment aired with this year’s biggest performers reading — you guessed it — mean tweets about themselves.

Some of the choice Tweets included:

“Lin-Manuel Miranda looks like he’s getting a 1996 NBC sitcom with his haircut.”

“Emma Stone looks like a crack whore in every role she plays.”

“Miles Teller has the face of a guy who requests Gangnam style at a wedding where he doesn’t know the bride or groom.”

“I think Jeff Bridges wears pants a lot less than we think he does.”

“Oh, look at me… I’m Ryan Gosling and I have perfect bone structure and kind eyes. Go **** yourself Ryan Gosling.”

As always, some celebs took the insults in stride like Natalie Portman (who was called out for an alleged diet of hot tea with lemon and some toast despite her pregnant frame) while others let their emotions show.

“I’m going to white balance my TV on Jessica Chastain’s chest,” Chastain read out loud. She responded by admitting she didn’t know what white balancing meant.

The segment, created in 2012, has had multiple editions on Kimmel‘s show, including one with only NFL players and another with social media creators.