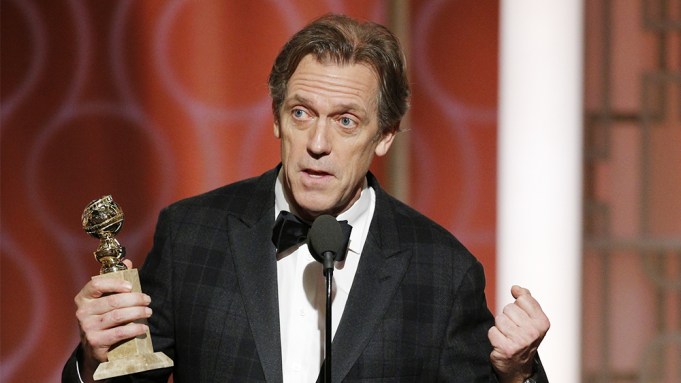 Though not the first political joke of the night, the claps from the audience indicate Hugh Laurie’s poke at the Republican party was a hit.

In thanking the Hollywood Foreign Press Association for his win, the British actor noted it was made even sweeter due to winning it at the “last ever” Golden Globes. Laurie won for the Globe for Best Performance by an Actor in a Supporting Role in a Series, Limited Series or Motion Picture Made for Television for his role in “The Night Manager.

“I don’t mean to be gloomy. It’s just it has the words ‘Hollywood,’ ‘foreign’ and ‘press’ in the title,” Laurie said, the audience breaking out into laughter and cheers.

“I also think to some Republicans even the word ‘association’ is slightly sketchy,” he added.

Laurie is of course alluding to the strained relationship that’s erupted between Donald Trump and the Republican and the entertainment industry.

The President-elect has been vocal in his dislike for the entertainment industry. He’s often railed against the liberal bias of the media, critiquing “Saturday Night Live” for their jokes at his expense and insulting celebrities for expressing their support for his opponent in the presidential election, Hilary Clinton.

Hollywood, for its part, has been fighting Trump for months. Celebrities, including Keegan-Michael Key, Sally Field and Steve Buscemi among others, appeared in a video demanding congress keep Trump from office. Late night TV hosts Samantha Bee and John Oliver have been particularly critical of the President-elect.

While many celebrities in the audience clearly found Laurie’s joke a riot, it’s unlikely Trump and his party peers will be as amused.

Backstage, Laurie explained why “The Night Manager” was such a passion project.

“The whole damn thing was pretty much a dream for me. This was a story that I had fallen in love with almost 25 years ago when the book was published. It’s the only time in my life … I actually tried to option the novel because I thought this has to be on the screen,” he explained. “I just always believed that the romance of the story, the nobility of the story was so overwhelming to me.”