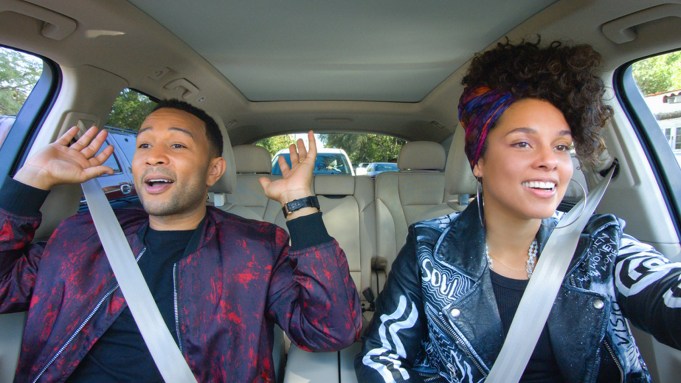 If you’ve been living outside the reach of viral videos for the past year (kudos), you may not be familiar with “Carpool Karaoke,” the wildly popular segment of “The Late Late Show with James Corden” where Corden drives around Los Angeles with celebrities, singing. It is that simple, and yet it is also oddly endearing. Who hasn’t been stuck in traffic, with only the radio to keep us company? “Carpool Karaoke” brings the people on the radio into a car — not your car, but close enough. Performers, of course, love an opportunity to ham it up — and Corden, who drives, is a musical theater nerd who knows how to put on a good show.

Now “Carpool Karaoke” has broken out into its own series, with episodes running between 15 and 20 minutes long, on fledgling platform Apple Music. Though Corden is executive producing, he only hosts the first episode; after that, the pairings will include old friends (Alicia Keys and John Legend), unlikely bedfellows (Billy Eichner and Metallica), and family outings (Miley Cyrus, Billy Ray Cyrus, and the rest of the Cyrus clan).

Based on tonight’s premiere episode, with Corden and Will Smith, “Carpool Karaoke” is struggling a little to find a standalone spark outside the world of “The Late Late Show.” During Corden’s late-night show, the sunny highways of Southern California provided a visual and structural break from the show’s set — and in a medium that relies on celebrity guests, “Carpool Karaoke” is a fun way to combine interview elements with an activity that performers would naturally be good at.

But on its own, “Carpool Karaoke’s” weaknesses are magnified. The segment always had a bit of overenthusiasm for celebrity; the viewer is invited into a private hangout but can’t participate, as notable names and famous faces joke and sing with each other. This is unfortunate, because at its most successful, “Carpool Karaoke” makes its participants unassuming and even relatable. Adele busting out Nicki Minaj’s verse in Kanye West’s “Monster” makes even her — a multi-platinum pop diva — as familiar as the next person in line at the drive-thru. In the premiere of the Apple Music show, Will Smith decides to skip out on traffic by directing Corden to a private helicopter. “Carpool Karaoke” on Apple Music is just another unscripted series about famous people with varying degrees of talent, in scenarios that are partly choreographed and partly staged.

There’s also a messier streak to Apple Music’s “Carpool Karaoke.” In the original segment, as the car trips became more elaborate, Corden started playing pranks. That is a bigger part of the Apple Music show’s DNA: In the premiere episode, Smith and Corden run roughshod through an outdoor wedding shoot, just because Corden semi-dares Smith that they might not recognize him. Smith introduces himself to the bridal party and lays down on the bride’s train to pose for photos, while meticulously dressed bridesmaids swarm around the couple. Smith is confident that he will be accepted there, and Corden is off to the side cracking up. It’s a bit shameless. In a later episode — which have been teased but not released to critics — the Cyrus clan decides to go jump around in a bouncy house at a kid’s birthday party.

And as a standalone show — especially without Corden, whose reliable charm keeps even stilted celebrities interesting — it’s possible that there’s just not enough content to go around. Later episodes’ success and/or failure will likely depend entirely on the strength of the pairings. But for a segment that emphasized spontaneity and intimacy, “Carpool Karaoke” on Apple Music feels distancing — highlighting how dissimilar the guests are from the audience, instead of the other way around. Sometimes it feels like a camera crew was invited along to watch Corden and Smith network, or to tag along with another bizarre family outing for the Cyrus family. But why would we pay to watch them do something they would do anyway?