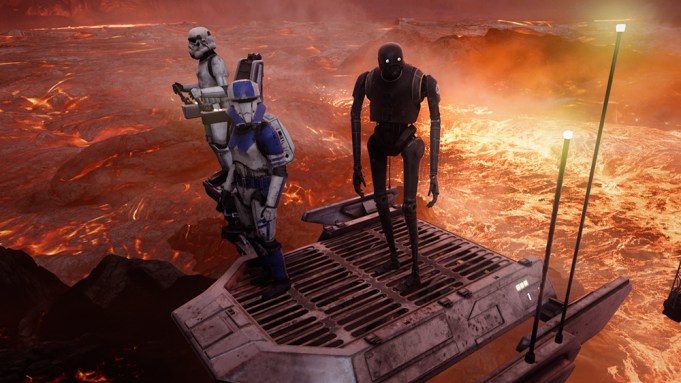 One of the biggest impediments to the growth of virtual reality is the expensive equipment consumers must buy to experience it at home. That’s why many are placing their bets on location-based VR experiences that are bigger and more elaborate than anything that can be ported into someone’s living room, such as “Star Wars: Secrets of the Empire,” which was previewed for journalists at the Disney Accelerator in Glendale last Thursday.

A collaboration between “hyper-reality” attraction specialists The Void and ILMxLAB, the immersive entertainment division of Lucasfilm, “Secrets of the Empire” virtually transports guests to the molten planet of Mustafar, where they infiltrate an enemy outpost and battle storm troopers, giant lava monsters and other inhabitants of the “Star Wars” universe.

Outfitted with custom VR goggles, headphones and a haptic feedback vest that makes them feel the impact of every simulated laser blast, users don’t just watch the story unfold, waving hand controllers; they move through the environment pulling levers, hitting control buttons, firing a rifle, and interacting with fellow guests on their mission, as well as characters including K-2SO (Alan Tudyk), Cassian Ando (Diego Luna) and Athex (Sam Witwer).

“The idea is to make you feel like you’re there, not to just see it or hear it, but to be able to reach out and touch it,” says Curtis Hickman, co-founder and chief creative officer of The Void. “If it’s hot, it feels hot. If it’s a chair you need to sit down on, you can go sit down on that chair.”

“Secrets of the Empire” will open at Void Experience Centers at Disney Springs at Walt Disney World Resort in Orlando, FL, and Westfield in London on Dec. 16 and at Downtown Disney at Disneyland Resort in Anaheim, CA, on Jan. 5. Tickets for the Disney-adjacent locations are priced at $29.95. The experience, which runs about 25-min. (with introductory video), will open at additional locations to be announced soon.

Although it’s no coincidence that the debut of “Secrets of the Empire” coincides with the Dec. 15 release of the latest installment of the film franchise, “Star Wars: The Last Jedi,” those behind the project insist that it was designed to stand on its own.

“It’s not just marketing,” says Diana Williams, story group executive and content strategist for ILMxLAB. “The stories that can be crafted for The Void are end-to-end experiences for anyone, fan or non-fan.”