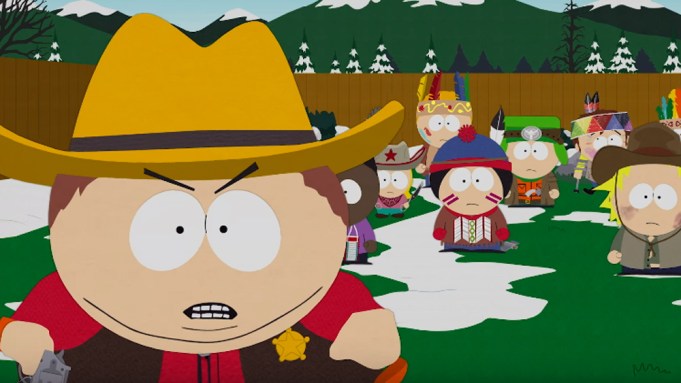 “South Park” is headed to mobile.

Ubisoft debuted, during a press conference on Monday at E3, a new trailer unveiling the release date for the long awaited video game “South Park: The Fractured but Whole,” and also announced the franchise’s move to mobile gaming with “South Park: Phone Destroyer.”

“The most high-tech company in the world has unlocked the mobile phone’s true potential so that it can do what it was truly meant to do,” a voiceover says as the trailer opens to one of the show’s main characters, Eric Cartman, announcing they’re playing Cowboys and Indians.

The game seems to share the same turn-based combat used in Ubisoft’s other “South Park” games. It also follows the same narrative of the kids from South Park, Colo., dressing up and playing games around town. The trailer shows the kids facing off while clad as cowboys and Native Americans, buccaneers and knights, and bards and choirboys.

Expect the show’s humor to remain intact in the game as the trailer also features the powerful ability of “co– magic.”

“South Park: Phone Destroyer” will be the third game from the franchise to be released by Ubisoft. “South Park: The Stick of Truth” was launched in 2014, and its sequel, “South Park: The Fractured but Whole,” will debut on Oct. 17.