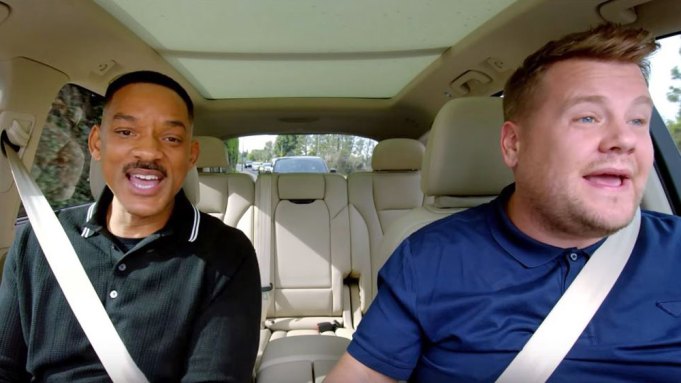 Other celebrity pairings in the series include Ariana Grande and Seth MacFarlane, Michael Strahan and Jeff Gordon, Blake Shelton and Chelsea Handler, John Cena and Shaquille O’Neal, and Billy Eichner and Metallica.

The series is an expansion of the popular “Carpool Karaoke” featured on Corden’s late night CBS talk show. The bit was even included in Sunday’s Grammy Awards telecast, with Corden “driving” a cardboard car through the audience, culminating with a star-studded rendition of “Sweet Caroline.”

The expanded series will span 16 half-hour episodes, and judging by the new trailer, go beyond the car doors.

R&B singers Keys and Legend are joined by a choir in a laundromat, Shelton and Handler get inebriated in a bar (hopefully after they’re done driving), Eichner and Metallica invade a supermarket, while Corden and Smith take off in a helicopter.

One of the funniest moments in the trailer is when the muscle-bound Cena and 7’1′-tall O’Neal squeeze themselves into a tiny car.

Carpool Karaoke” is produced by CBS Television Studios and Fulwell 73. James Corden and Ben Winston serve as co-creators and executive producers along with executive producer and showrunner Eric Pankowski. According to the trailer, the series will be “coming soon.”

Watch the extended trailer here or above.