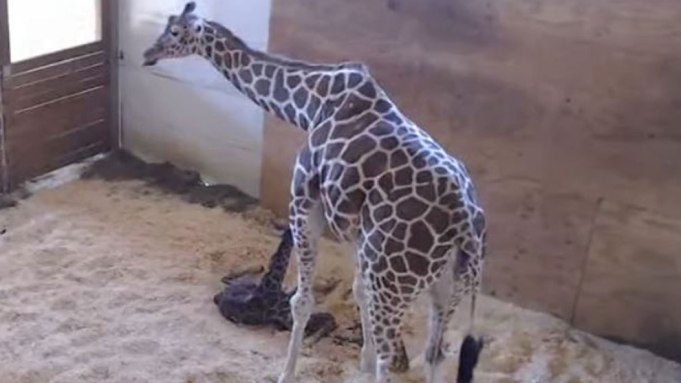 Courtesy of The Animal Adventure Park

April the Giraffe has finally given birth.

The mother delivered to her fourth calf at approximately 10am ET/7am PT Saturday morning.

April became an internet sensation as spectators tuned into live cameras streaming from the Animal Adventure Park in Harpursville, NY.

The gestation period for a giraffe can last for 13-15 months. Dedicated viewers monitored the cameras for weeks with no signs of birth. Given the long waiting period, some skeptics even declared the pregnancy a hoax or April Fool’s joke.

However, the morning of the 15th, two hooves appeared, followed by a snout. And soon, baby giraffe was in the world. A naming contest will be held.

At the moment of birth, over 1.1 million viewers were watching the primary live stream, with thousands watching secondary streams. Over a million tuned in as baby took its first steps minutes later. It was a bona fide new media event.

In comparison, the inauguration of Donald Trump — the most live streamed event ever — peaked at 4.6 million concurrent viewers, according to TechCrunch.

In addition to having her own live stream, April has a dedicated website. Fans could also get text alerts notifying them when April was nearing delivery. On Saturday morning #ApriltheGiraffe was the top trending term on Twitter.

Relive the birth below (Warning: images of live animal birth).

You can also tune into the live stream here or above to see how mother and baby are doing.