Amazon is apparently starting to feel the impact of its latest spat with Google: Publicly available data suggests that sales of its Echo Show device have been declining ever since Google decided to remove YouTube from the device last week. The average review rating for the device has also been impacted, as consumers are starting to vent their frustration with one-star reviews.

Last Tuesday, news broke that Google had disabled the Echo Show’s Amazon’s access to YouTube. Google explained the step by saying that Amazon’s implementation had violated YouTube’s terms of service, but Amazon complained that the cut-off had happened without an explanation or a warning to customers. “There is no technical reason for that decision, which is disappointing and hurts both of our customers,” the company said in a statement.

Publicly available data now suggests that it also hurts Amazon’s sales of the device. Amazon hasn’t released any official numbers on how many Echo Shows it has sold since first shipping the device in June. However, the company does publish sales rankings for the product, revealing how it fares in comparison to other best-selling electronics items on its site — and those rankings show a clear dip.

Over the past month, the Amazon Echo Show was generally within the 30 most-sold electronics products on Amazon.com, and even climbed to become the 18th-most-sold item on Sept. 18, according to Amazon data aggregated by CamelCamelCamel.com. But ever since the removal of YouTube from the device made news on Sept. 26, there has been a notable decline. Earlier this week, the Echo Show even fell to the 60th rank.

To put this in perspective: A product ranked 18th appears on the first page of the Amazon best-sellers list for the respective department. A product ranked 60th barely makes it on the third page.

An Amazon spokesperson contended that the list of best-sellers sees a lot of fluctuation, and that the company also introduced six new devices last week, which could have pushed the Echo Show down in the sales rank. “This is rhythm of the business after we announce new devices,” the spokesperson said via email.

But it’s not just the sales that are being impacted by the YouTube removal. Current owners of the device are also turning to Amazon’s reviews section to vent their frustration.

“Without YouTube it’s a speaker with words,” wrote one reviewer. Another called it a “paperweight” without YouTube access, and a third consumer wrote: “Best feature has been removed… Amazon should start issuing refunds.” 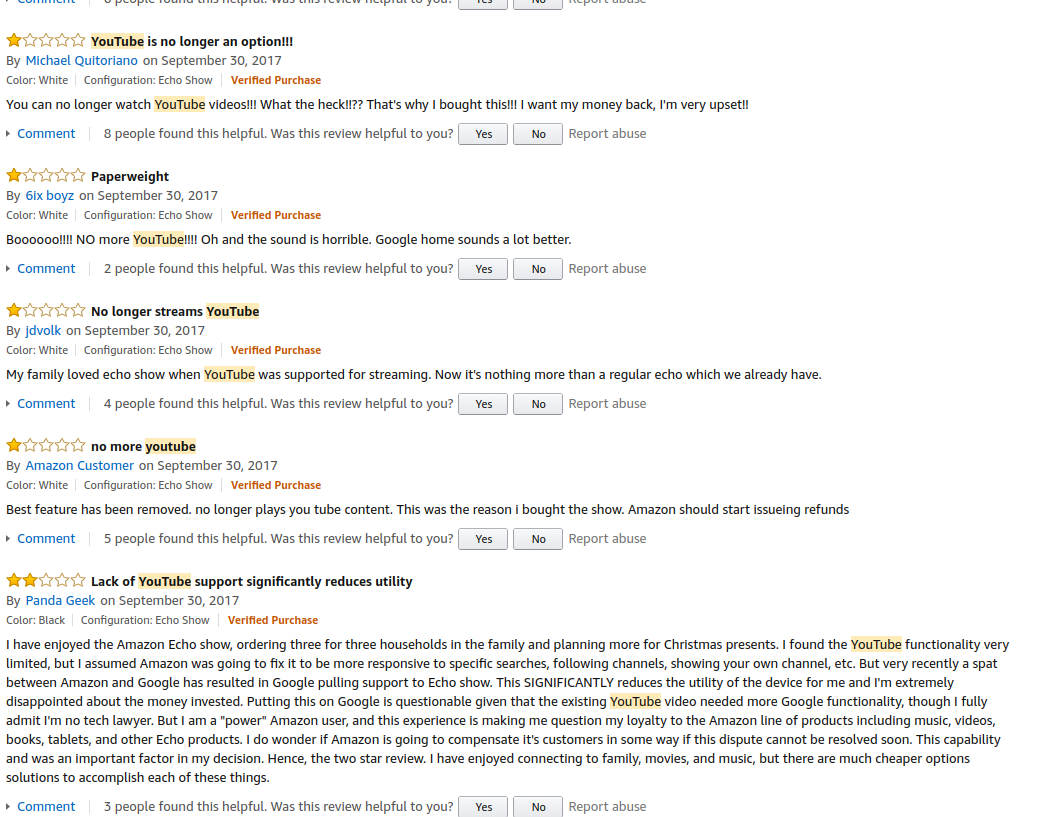 The Echo Show currently has more than 2,900 reviews on Amazon, and any sentiment shift will slowly materialize over time — but there are signs that this is already beginning to happen. Data aggregated by Keepa.com shows that the average review rating for the device had been at a steady 4.1 ever since early August. Last Friday, that average review rating dipped to 4.0, where it has remained for most of the time since.

That one decimal point may not sound like much, and Amazon’s spokesperson pointed out that many of Amazon’s products “fluctuate a .1 start rating week over week.” However, this particular shift was caused by just about 300 reviews left for the product ever since the YouTube removal. If negative reviews continue to pour in, the review average could quickly fall below 4, which could further suppress sales.

Amazon is actively working on bringing YouTube back to the device, according to a source with knowledge of those efforts. How it aims to accomplish this is unclear, as are many of the details of the ban. Google has said that Amazon’s implementation of YouTube on the Echo Show violated the terms of service for YouTube’s API, but hasn’t released any details on which parts Amazon exactly ran afoul.

The video service has enforced its API rules in the past, banning both small YouTube app developers and big companies like Microsoft alike. One of the issues at stake in these past conflicts included deep links to YouTube’s video files, which made it impossible for YouTube to run ads against its videos.

A Google spokesperson told Variety that the company had been “in negotiations with Amazon for a long time, working towards an agreement that provides great experiences for customers on both platforms. We hope to be able to reach an agreement and resolve these issues soon.” An Amazon spokesperson declined to comment further on efforts to bring YouTube back to the device.

Google would like to use this dispute not only to resolve this particular implementation of YouTube, but also a long-simmering conflict that escalated in 2015, when the online retail giant banned Google’s Chromecast streaming adapter and Apple’s Apple TV from its web store. Amazon at the time contended that it didn’t want to confuse consumers with products that didn’t offer access to its video service. However, the move likely also helped Amazon to boost the sales of its own TV streaming devices.

Google’s removal of YouTube from the Echo Show will inevitably lead to criticism that the company may have similar ulterior motives beyond the stated API violations, especially in light of reports that it may be working on its own version of a smart speaker with an integrated screen.

Asked about plans for such a device, Google VP of home products Rishi Chandra told Variety at the sidelines of the company’s Pixel 2 press event this week that Google is still evaluating the opportunity. “We are thinking through it,” he said. Most people likely wouldn’t want to buy yet another display for their home, Chandra contended, especially if that display only replicates what their phones, tablets, and TVs already do. Instead, there would have to be distinct use case for such an additional screen.

“We want to make sure we get it right” before introducing any such product, he said.