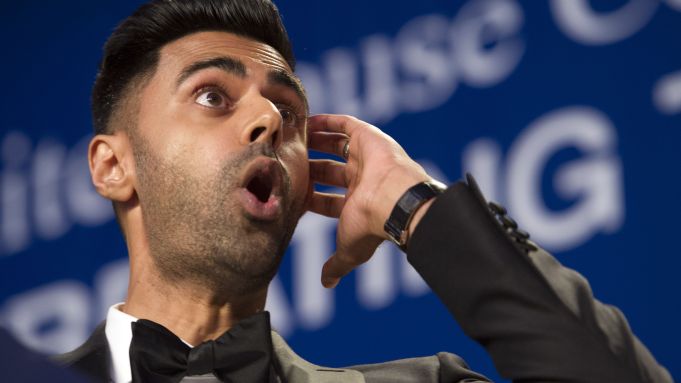 Hasan Minhaj delivered a brutal and biting monologue about President Trump at the White House Correspondents’ Association Dinner, in an appearance that was as much a statement as it was a bit of satire.

Minhaj said that Trump does not respect the First Amendment.

“The man who tweets everything the enters his head, refuses to acknowledge the amendment that allows him to do it,” he said.

He riffed on Trump’s overnight tweeting — and the fact that he does it sober — while predicting that the president would slam his appearance as an attack on “How Nicki Minaj bombed at the dinner.”

Minhaj claimed that he was told not to skewer Trump at the event — not to “roast the president in absentia” — but felt compelled to do so.

“You guys are public enemy number one. You are his biggest enemy. Journalists. ISIS. Normal-length ties,” he said.

Minhaj is a correspondent for “The Daily Show with Trevor Noah,” and was announced as the evening’s entertainment just a few weeks ago. He quipped that the WHCA couldn’t get anyone else to agree,

“No one wanted to do this, so of course it landed in the hands of an immigrant,” Minhaj said.

He accused Trump, who held a Pennsylvania rally earlier in the evening, of not being able to take a joke by skipping the dinner.

But he said that “only in America can a first-generation Indian American Muslim kid get on this stage and make fun of the president.”

He also called Trump the “liar in chief,” and said that “we are living in a strange time when trust is more important than truth.” In his attacks on the news media, Trump sometimes cites polling figures showing low approval ratings for the Fourth Estate.

“In the age of Trump, I know that you guys have to be more perfect than ever, because you guys are how the president gets his news,”

Had Trump been in the room, it may have made for the most controversial entertainer’s appearance at the dinner since Stephen Colbert delivered a blistering satire of President George W. Bush in 2006. Minhaj’s monologue was less about one-liners and more in the vein of a “Daily Show” commentary, with a well-thought-out flow of the material to make its point.

Minhaj also took aim at members of Trump’s administration, doing an extended riff where he repeated, over and over, that he did “not see Steve Bannon,” until he started to get close to using the word “Nazi.”

He quipped about Attorney General Jeff Sessions using the “N” word, and said that Sessions wasn’t at the dinner because “he was busy doing a pre-Civil War re-enactment.”

He made jokes about the suggestion that White House Press Secretary Sean Spicer was denying the Holocaust. “How many people do you know who could turn a press briefing into a full-on Mel Gibson traffic stop?”

His material about the media also mixed humor and commentary. He slammed Fox News for giving Bill O’Reilly a $25 million severance package, “the only package he won’t force a woman to touch.”

“The news coming out of the White House is so stressful,” Minhaj said. “I have been watching ‘House of Cards’ just to relax.”

Trump wasn’t there, few Hollywood celebrities attended and Minhaj was not too well known among many in the D.C. crowd. The dinner still sold out.