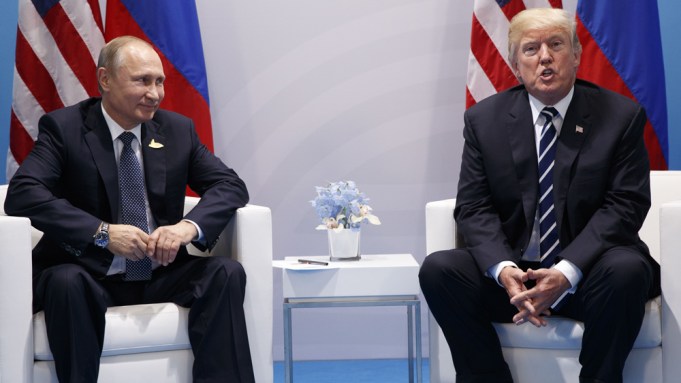 The meeting went for two hours and 16 minutes, well beyond an expected 30 minutes of talks. It was their first face-to-face meeting at the G20 summit.

Tillerson told reporters afterward that Trump raised the issue at the start of the meeting and they had a lengthy discussion, but that Putin denied it.

“They had a very robust and lengthy exchange on the subject,” he said, adding that Trump pressed Putin on Russian interference multiple times.

Tillerson said that Trump “took note” of possible additional sanctions against Russia being weighed by Congress “to make it clear as to the seriousness of the issue.” But Tillerson said that there is an “intractable disagreement” on that matter.

Tillerson said that they intend to have further discussions on how the U.S. can secure a commitment from Russia that they will not interfere in our elections and those of other countries.

Trump has in the past expressed doubt about Russian interference, and on Thursday told reporters that he thinks Russia was involved but other countries may have also been responsible.

Other issues were raised. After the meeting, representatives for both leaders said that a ceasefire will begin in southwest Syria at noon on Sunday. The ceasefire deal was reached between the United States, Jordan, and Russia.

Tillerson told reporters that Trump and Putin “connected very quickly” and that “there was a very clear positive chemistry between the two.”

Russian Foreign Minister Sergey Lavrov told reporters that Trump accepted Putin’s denial that Russian was responsible for the hacking incidents during the 2016 election, according to press accounts of Lavrov’s briefing.

Trump and Putin’s meeting was opened briefly to the media, as the two leaders sat beside each other on white armchairs with Russian and U.S. flags behind them. They shook hands at one point, and exchanged optimistic messages. Joining them were their translators, as well as Lavrov and Tillerson.

“We look forward to a lot of very positive things happening for Russia, and for the United States, and for everyone concerned. And it’s an honor to be with you,” Trump said.

Putin noted that they had spoken over the phone, but “phone conversations are never enough definitely.”

“I’m delighted to be able to meet you personally, Mr. President,” Putin said. “And I hope, as you have said, our meeting will yield positive result.”

At one point, Putin gestured toward reporters and said to Trump, “These are the ones who insulted you?” Then they appeared to smile or chuckle at the remark.

"These are the ones who insulted you?" Putin to Trump as he points to reporters https://t.co/vxx8qcDkRp