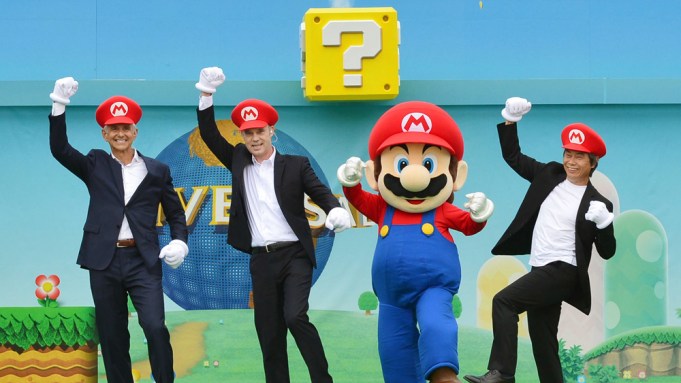 The festivities kicked off with a welcome from Mario, Nintendo’s moustached mascot.

“The new Nintendo themed area will have different levels and will offer our guests an unique experience,” explained Jean Louis Bonnier, CEO of Universal Studios Japan. “It will provide a complete immersive experience which will have attractions, retail, and restaurants.”

The key attraction for Super Nintendo World will be a Mario Kart experienced inspired by the popular racing video game. It’s unclear if it will be a traditional ride, virtual experience, or a combination of both.

Regardless, executives boasted the Mario Kart experience will be “an attraction that is unlike any the world has ever seen” and “the most immersive and cutting-edge technological attraction we could possibly imagine.”

“We have been collaborating on many ideas for the world. I am very excited to step into Super Nintendo World and experience its immersiveness,” added Super Mario creator Shigeru Miyamoto.

According to the press release, Super Nintendo World will open by 2020 Summer Olympics in Tokyo.

A concept video was also released, with Mario leading a tour through a whimsical, colorful land.

Guests enter through a green pipe — a nod to the mode of transport in the video game. Both Princess Peach’s and villainous Bowser’s castles are visible, as well as a tiered landscape.

Expansions are planned for the Universal Studios Orlando and Hollywood locations, but dates have not been set. Both U.S. parks launched Wizarding Worlds of Harry Potter in recent years, based on the popular J.K. Rowling books.

Check out the groundbreaking video above and the concept video below.