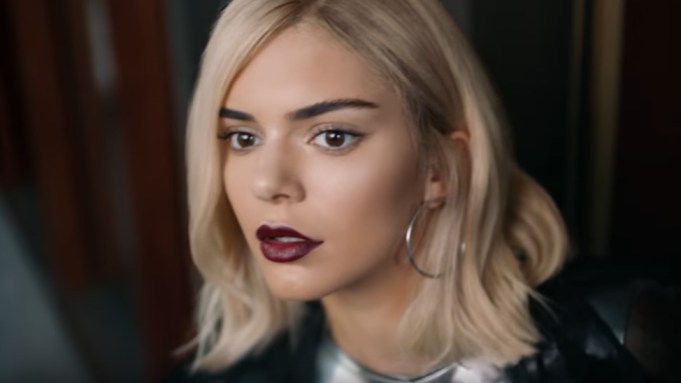 In an attempt to court a politically active younger demographic, Pepsi may have instead set them off.

A new ad for the soft drink stars Kendall Jenner as a high-fashion model, donning a blonde wig in the midst of a protest. It’s not clear what the protest is supposed to be about — many of the signs read general phrases like “Join the conversation” and “love.”

Beckoned by one of the protesters, Jenner eventually rips off her blonde wig and joins the fray. Grabbing a can of Pepsi, she heads toward one of the grim-faced police officers, and hands him a drink. He accepts and smiles, eliciting cheers from the crowd.

It’s hard not to compare the image of Jenner handing the can to the police officer to the award-winning photo from a Baton Rouge, La., protest against police brutality last July. In it, Ieshia Evans can be seen, calm and collected, offering her hands for arrest to a group of riot-gear-clad police officers.

In the YouTube description for the commercial, titled “Live for Now Moments Anthem,” Pepsi calls it “a short film about the moments when we decide to let go, choose to act, follow our passion and nothing holds us back.” It features “Lions” by Skip Marley.

Following the release of the ad, Pepsi quickly began trending in the U.S. on Twitter, as many social media users ripped it to shreds. Reactions ranged from humorous jabs (“Hi, I’m Rachel Dolezal for Crystal Pepsi”) to calls for whoever greenlit the commercial to be fired.

See a few of the tweets below.

I'm sure @pepsi already has an apology drafted. These companies are not THAT tone deaf. They're using controversy to their advantage

Hell yeah I hope the militarized police force beats the shit out of me while enjoying a cool, refreshing Pepsi™ https://t.co/E7NgU9uTwS

they pepsi but do they peplisten