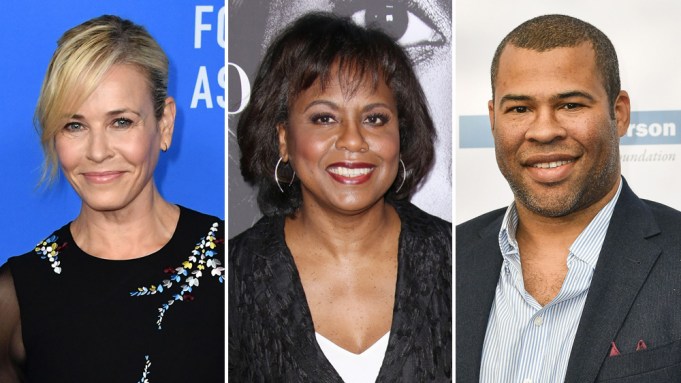 From 9 to 9:30 a.m. PST, viewers can live stream Handler’s talk with Hill, an attorney and civil rights activist who made headlines in 1991 for testifying that U.S. Supreme Court nominee Clarence Thomas, her former colleague at the U.S. Department of Education and the Equal Opportunity Employment Commission, sexually harassed her.

Debruge, a Variety film critic, will interview Peele, who first gained recognition for “Key and Peele” on Comedy Central before breaking onto the big screen with this year’s critically acclaimed horror film “Get Out.” Watch the live stream of their conversation from 2:10 to 2:40 p.m. PST.

The live streams will be brought straight to viewers from the Wednesday, Nov. 1 event. While these two specific events will be live streamed from the summit, the entire Inclusion Summit will take place all day from 8 a.m. to 6 p.m. Watch the featured Keynote live streams at the links below.

10:05 a.m. to 10:45 a.m. Hollywood Finds its Voice for Change Presented by Easterseals
Living in such a politically charged world, there is no better time than now for Hollywood’s most influential talent to speak up in support of equal treatment and opportunity for all communities – spanning ethnicity, disabilities, gender and LGBTQ identity. The entertainment industry is taking a stand against social injustices, such as unsupportive and hurtful policies toward the #BlackLivesMatter, as well as LGBTQ and women’s rights movements.  How is Hollywood taking advantage of its powerful voice through various organizations, alliances and entertainment projects? Creative leaders and influencers explain how they are rallying their fans to join them in the fight for inclusion and social change.

11:05 a.m. to 11:50 a.m. Inclusive Brand Innovators
Entertainment and consumer brands are recognizing that it is vital to develop and market products that authentically speak to today’s society and its diversity. How can inclusive hiring at a company impact their ability to connect to diverse consumers? Which brands are succeeding in their inclusion missions? Executives from leading brands discuss how they have evolved their inclusive strategies in order to effectively reach a wide array of communities.

Do you want to make money while you sleep and maintain a profit during economic ups and downs? Having learned from billionaire bosses and clients, Nely Galán understands the importance of cultivating relationships with banks, the SBA and investors, in addition to creative tracks. Galán takes you through her trajectory in entertainment from Station manager of a local Television station, to President of Entertainment of Telemundo, to producer, to entrepreneur.

1:10 p.m. to 1:30 p.m. Native Americans in Film and Television
Indian Country is a diverse and vibrant part of this nation with tribes spanning 34 states. Over centuries, Native Americans have faced a myriad of challenges – from ethnic persecution to economic dislocation to political disenfranchisement, so bringing positive stories to light has never been more important.  RUMBLE: The Indians Who Rocked the World is a feature documentary that tells the story of Native American and indigenous musicians and their influence on the history of American music. The film features music icons such as Jimi Hendrix and reflections from Martin Scorsese, Tony Bennett and Quincy Jones.

1:30 p.m. to 2:10 p.m. Recognizing the Opportunity for Content that Resonates with Grownups
The best film and TV engages with great characters and gripping stories – many times starring our most experienced actors. How is Hollywood approaching storytelling decisions when it comes to actors reaching middle age or older? Are producers, directors and writers avoiding stereotypes, and creating the right roles to fit experienced actors’ caliber of talent? How might recent breakout projects for and about grownups be impacting the current development process? Top storytellers will explore how they are creating compelling film and TV where experience matters above all else.

2:40 p.m. to 3:20 p.m. The Future of Inclusive Storytelling presented by Color of Change
There have been a number of high-profile wins for inclusive storytelling, including Moonlight, landing  the Oscar for Best Picture earlier this year. That success was followed up by the Academy of Motion Arts and Pictures inviting their most diverse group of members yet in 2017. However, some of today’s most inclusive TV series, were canceled in recent months. How is Hollywood working to craft inclusive stories while simultaneously connecting with audiences? Further, what content is breaking through to fill the void and speak to a neglected, under-served community?  Top storytellers share their strategies and successes.

4:25 p.m. to 5:05 p.m. Mentoring the Entertainment and Media Industry
Top-notch executives from well-respected An exploration into efforts at entertainment and media companies to mentor new generations of talent, and support an increase of inclusion among its ranks. What programs are succeeding across film, TV, music and digital to help boost success among underrepresented communities? Who are today’s mentors who are devoted to advancing inclusive policies at their companies? Champions for increasing representation for all marginalized groups in media will discuss their work.