Celebrities Who Made a Difference in 2017

2017 saw some dark times, to say the least. From the aftermath of an especially divisive election to terrorist attacks, the troubling headlines — both in the U.S. and abroad — kept rolling in.

And celebrities, like so many other citizens, felt compelled to led a helping hand. While there are countless stars who spoke out politically on social media, raised money for various causes, and gave rousing speeches at awards shows and rallies, we decided to look back at some of the stars who made a measurable difference in the past year. Whether they were championing diversity in Hollywood, inspiring hope after tragedy, or exposing some of the entertainment industry’s dark secrets, here are 10 celebrities who truly made a difference in 2017.

Grande was performing at a concert on May 22 in Manchester when unexpected tragedy struck: a terrorist bombing at the Manchester Arena, killing 23 people and injuring more than 500 others. It would have been understandable for Grande to recoil from the public for awhile, but instead, she was back on stage no less than two weeks later in triumphant fashion. Spearheaded in part by manager Scooter Braun, Grande headlined a benefit concert, One Love Manchester, raising funds for the victims of the bombing and featuring big names like Katy Perry, Justin Bieber, and Miley Cyrus. It also spawned one of Grande’s most memorable performances: a touching rendition of “Over the Rainbow.”

Chance the Rapper puts his money where his mouth is. The Chicago native has always been an advocate for his city, but 2017 saw the artist step up in a big way, when he and his charity SocialWorks donated a whopping $2.2 million to the Chicago Public School system. In addition, he announced the Twilight Awards, which will take place in June 2018 in the Windy City and honor the often-underappreciated educators. On a smaller but still important scale, he handed out toys to children, collected by Chicago-area students, on Dec. 20 at the city’s Field Museum. And that’s not to mention the other work he’s done, like livestreaming his Hollywood Bowl concert in October to raise funds to aid Hurricane Maria victims. Chicago truly couldn’t ask for a better hometown hero.

Stay strong, Keaton. Don’t let them make you turn cold. I promise it gets better. While those punks at your school are deciding what kind of people they want to be in this world, how would you and your mom like to come to the Avengers premiere in LA next year? https://t.co/s1QwCQ3toi

Sometimes, when someone’s being bullied, all it takes is one cool kid to stand up for them… and who’s cooler than Captain America himself? When Keaton Jones posted a video that would go on to go viral with a devastating account of being bullied, several celebrities sent him support on social media, but Evans invited him to the “Avengers: Infinity War” premiere, presumably sending the bullies running for the hills. Plus, the actor has been an outspoken activist via social media, perhaps most memorably getting in a heated Twitter war with David Duke. “Look, I’m in a business where you’ve got to sell tickets,” he told Esquire in March. “But, my God, I would not be able to look at myself in the mirror if I felt strongly about something and didn’t speak up.” Amen, Cap.

Immigration was no doubt a hot-button issue this year, especially considering that the current POTUS staked his campaign, in part, on the promise of “The Wall.” “Jane the Virgin” star Rodriguez just didn’t speak out when Trump announced plans to roll back the Deferred Action for Childhood Arrivals Program — she’s developing an entire show aimed at dismantling the stigmas associated with immigrants and telling their stories. Titled “Illegal” and announced shortly after Trump’s DACA plans made headlines, it’s based on the life of series co-executive producer and writer Rafael Agustin. It’s one of two shows related to immigrants she’s developing as part of her overall deal with CBS TV Studios. The other, “Have Mercy,” centers on a Latina doctor who is unable to practice when she immigrates to Miami.

If you’ve been sexually harassed or assaulted write ‘me too’ as a reply to this tweet. pic.twitter.com/k2oeCiUf9n

When Milano tweeted a message inviting women to share their stories of sexual harassment or assault with the hashtag #MeToo, she wasn’t surprised at the massive response she got from around the world, she told Variety at the time. But it would have been hard to predict how much the movement, first started by Tarana Burke 10 years ago, would take off after Milano lent it her voice. Within 24 hours, more than 53,000 people left comments on her original viral tweet, and tens of thousands more used the hashtag to raise awareness of the daily struggle so many women face. Celebrities like Lady Gaga, Jennifer Lawrence, and Reese Witherspoon opened up about the issue. The epidemic of sexual harassment still rages on but, thanks in large part to Milano, it’s no longer a silent one.

To be fair, former San Francisco 49ers quarterback Kaepernick first took the knee heard ’round the world in 2016, when he began to kneel during the National Anthem before the start of NFL games to protest racial inequality in America. But 2017 saw his actions amplified, thanks in large part to President Donald Trump. POTUS tweeted back in September that players who kneel during the National Anthem should be fired or suspended — leading to dozens of the NFL’s top stars, including the conservative Dallas Cowboys owner Jerry Jones, taking a knee in solidarity with Kaepernick. Kaepernick is a free agent now, with political controversy no doubt preventing him from getting picked up, but he deserves credit for starting a movement.

How do you solve a problem like whitewashing? Boycotts haven’t worked. Op-eds, while drawing attention to the issue, haven’t worked. Sometimes it takes an actor to step up — and step aside in place of a person of color. That’s exactly what Skrein, who was cast in the role of Major Ben Daimio in the new “Hellboy,” did just days after his casting was announced, leaving the role after public outcry, saying he didn’t know his character was “of mixed Asian heritage.” Daniel Dae Kim would go on to replace him. While you could argue that he shouldn’t have taken the part in the first place (and it would be a valid argument), stepping down was a bold move, and one that sets a precedent for other actors in his position. 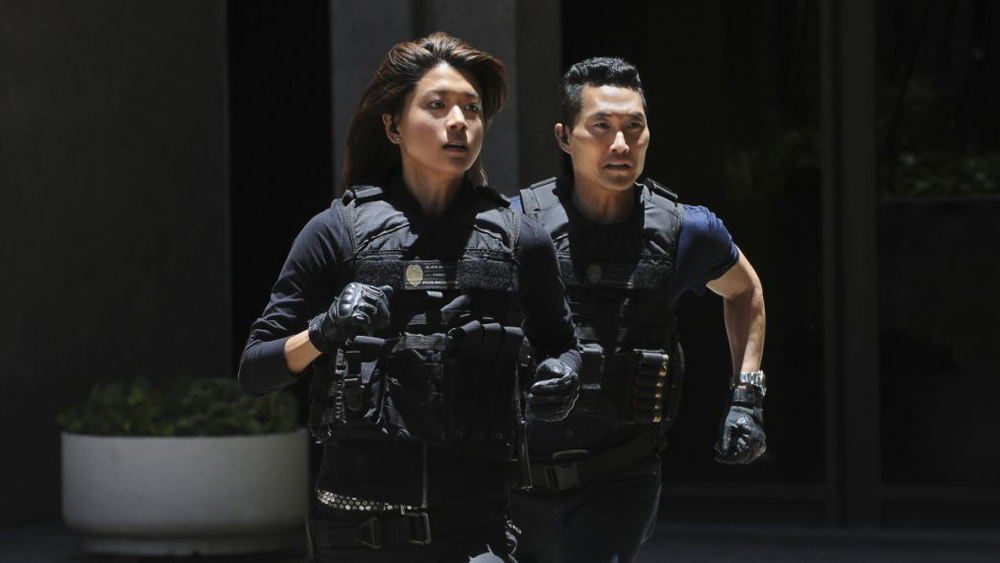 Kim and Park made headlines when they both exited “Hawaii Five-O” in June after appearing in the rebooted version of the CBS series since its 2010 debut. And they made no secret about the reason why: they had been seeking pay parity with white stars Alex O’Loughlin and Scott Caan. “It’s possible to be grateful for the opportunity and have respect for your colleagues and still maintain a steadfast sense of your self-worth,” Kim said in a Facebook post at the time. While CBS offered a different version of the negotiations (“Hawaii Five-O” showrunner Peter Lenkov insisted that CBS was “extremely generous” with the departing actors), Kim and Park opened the door to a necessary conversation about race and salary in Hollywood.

When Hurricane Maria ripped through Puerto Rico, Miranda, who has family on the island and is of Puerto Rican heritage, couldn’t sit around and do nothing. Quite the opposite: in October, he released a charity single, “Almost Like Praying,” featuring Jennifer Lopez, Marc Anthony, Camila Cabello, Gloria Estefan, Fat Joe, Luis Fonsi, John Leguizamo, Rita Moreno, and more to raise money for Puerto Rico after the hurricane. He just recently urged the government to provide more assistance to Puerto Rico months after the hurricane in a stirring op-ed for the Washington Post, and — perhaps the cherry on top — revealed that he’ll be reprising his “Hamilton” role for a special series of shows in Puerto Rico next year, giving the beleaguered citizens something to look forward to.

For those suffering with suicidal thoughts and seeking help, Logic made it very easy for them to find. Logic named his emotional and powerful single “1-800-273-8255,” the number of the National Suicide Prevention Lifeline, and almost immediately made a huge impact. According to the hotline, when the song was released on April 28, it received the second-highest daily call volume in its history at the time: more than 4,573 calls, and increase of 27% compared to the same day of the week for the previous three weeks. The volume of calls also increased after Logic’s moving performance with Alessia Cara and Khalid at the MTV Video Music Awards, which saw the number flash on the screen behind him and local Los Angeles volunteers in T-shirts bearing the lifeline’s number join the stage.

The Victims Who Spoke Out

Last but certainly not least, this year was one of a reckoning of sexual abusers in Hollywood, spurred by the victims who were brave enough go public, among them several famous faces. Even before the Harvey Weinstein bombshell dropped, Taylor Swift successfully countersued a former radio DJ who groped her during a photo op (and then blamed her for the loss of his job) for a mere $1, sending a statement loud and clear. When the New York Times expose did publish, Ashley Judd and Asia Argento spoke on-the-record about their harrowing experiences with the disgraced mogul. Rose McGowan was another clear leader in the movement, holding Weinstein and his enablers accountable.

And then the other shoes started to drop. Olivia Munn went public with her claims against Brett Ratner, emboldening other women to do so as well. Terry Crews shattered stereotypes when he led the charge against WME’s Adam Venit, claiming that the high-profile agent groped his genitals at a Hollywood party. Anthony Rapp told BuzzFeed that Kevin Spacey made a pass at him when he was only 14, spurring even more men to level accusations against the “House of Cards” actor. And before even any of that, Amber Tamblyn, after alleging that James Woods hit on her when she was 16, wrote in the New York Times that she’s “done with being not believed.”

It’s hard to even mention, in brief terms, the dozens of others who came foreword, from the “One Tree Hill” cast’s brave letter alleging sexual misconduct against showrunner Mark Schwahn to Ellen Page’s powerful Facebook post that not only accused Ratner of sexist and homophobic behavior, but detailed the struggles facing women, LGBT individuals, and people of color in Hollywood. It hasn’t been easy — far from it — but the courage of victims started a cultural movement that will undoubtedly reverberate long after the year is over.