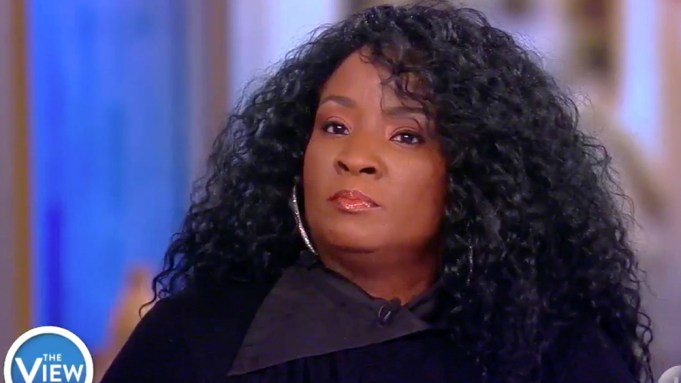 Courtesy of The View/YouTube screenshot

Perquita Burgess came forward on “The View” on Thursday to outline claims of sexual and racial harassment against Bill O’Reilly, the Fox News star who departed the network amid multiple allegations.

Burgess, represented by Lisa Bloom, called into a 21st Century Fox hotline earlier this week, but had remained anonymous until her “View” appearance. O’Reilly’s attorney had called the claims “outrageous.”

She was an office worker for a colleague of O’Reilly’s back in 2008 when she started noticing that O’Reilly would make a grunting noise as he passed her desk.

“It was embarrassing, so I just got to a point where I was not looking at him,” she said.

She said that three or four weeks later, they rode the elevator alone. As she got out, and he was behind her, Burgess said that O’Reilly said, “‘Looking good there girl.'”

“And the hair froze on the back of my neck because I knew the grunting and groaning is going on,” she said.

Burgess said that a few weeks later, he would continue to be near her desk and would “leer at me and looking at me up and down.”

“It made me feel uncomfortable. It was like street harassment in the office,” she continued.

In another incident, she said, O’Reilly walked past her desk and said, “‘Hey hot chocolate,’ but he doesn’t look at me when he said it. I didn’t respond. I was mortified, because not only was it sexual, I took that as a very plantation remark.”

O’Reilly’s attorney, Marc Kasowitz, issued a statement after she made her complaint on Tuesday, and said that “it is outrageous that an allegation from an anonymous person about something that purportedly happened almost a decade ago is being treated as fact, especially where there is obviously an orchestrated campaign by activists and lawyers to destroy Mr. O’Reilly and enrich themselves through publicity-driven donations.”