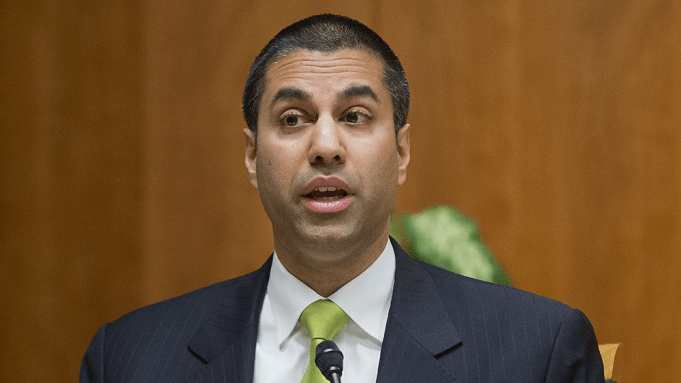 FCC Chairman Ajit Pai responded to John Oliver’s humorous take down last week over net neutrality with his own video.

Pai taped a video for IJ Review, a conservative news site, in which Pai read “mean tweets,” some of them inspired by Oliver’s skewering.

Some of the tweets that Pai got were racist. Among them: “Ajit Pai: Go back to Africa — were you came from.”

“Do you even English, bro?” Pai responds in the video, laughing. Pai is a native of Kansas.

“That is fake news, man,” Pai says, before taking a bite of a sandwich.

He reads another tweet that says: “A PAI IS THE UNCLE TOM OF THE INDIAN PEOPLE. HE IS AN EMBARRASSMENT FOR ALL NON WHITES. HIS SYCOPHANTIC BEHAVIOR KISSING WHITE ASS IS GROSS.”

“As a conflicted brown man, I was on the fence,” Pai responds. “But when you put it in all caps, you persuaded me.”

Pai finished the video by drinking from a massive Reese’s Peanut Butter Cup mug. Oliver had joked about Pai’s references to the mug in his “This Week Tonight” segment.

In an internet update posted on Sunday, Oliver called out those who posted racist comments to the FCC’s site.

The FCC will vote on Thursday on whether Pai’s net neutrality proposal should be put out to public comment.  It would rollback the regulatory foundation for the agency’s existing net neutrality rules.