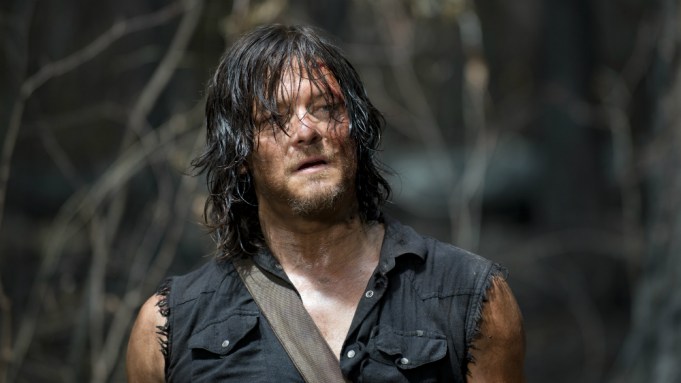 “The Walking Dead” Season 6 left us with a torturous cliffhanger and there are still a few months left before we find out who was at the end of Lucille and Neagan’s (Jeffrey Dean Morgan) wrath. However, a new teaser for Season 7 of “The Walking Dead” might hint at Daryl’s (Norman Reedus) fate.

The new clip features Austin Amelio’s Dwight, one of Neagan’s Saviors, riding Daryl’s motorcycle and wearing his iconic angel-wing vest as he passes a road littered with dying zombies. The 50-second clip could mean the unthinkable (Daryl’s dead), or it could suggest that Dwight has stolen Daryl’s gear once again, or it could mean nothing at all. Only time will tell.

Comedian Chris Hardwick, who hosts “The Talking Dead” aftershow, moderated a panel with “The Walking Dead” cast and creative team at Comic-Con in July. A new trailer for Season 7 debuted during the panel and although it didn’t reveal Neagan’s victim, it did tease a few new things to come, including King Ezekiel — a fan favorite from Robert Kirkman’s comics.

Fans, however, can take comfort in the fact that they won’t have to wait too long in the season to get an answer. Star Andrew Lincoln, who plays Rick Grimes, promised that Negan’s victim will be revealed in the season premiere.

“It’s a really s—ty start to the season” for the characters, Lincoln said, but promised that things will slowly get better for them.