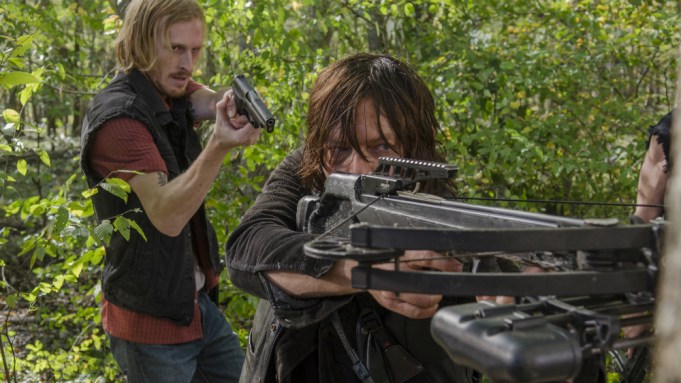 The March 27 episode of “The Walking Dead” ended with a bloody cliffhanger, as Daryl was shockingly shot by Dwight, the Savior he had helped earlier in the season, who repaid his act of kindness by stealing Daryl’s motorcycle and crossbow and killing Denise.

One of the unofficial mottos of “The Walking Dead” fandom is “if Daryl dies, we riot,” so episode writer and showrunner Scott Gimple obviously knew what he was doing when we saw Daryl’s blood splatter across the screen at the end of “East,” and in an interview with Entertainment Weekly, star Norman Reedus confirmed that the blood we saw belonged to Daryl.

But as fans have learned from this season’s controversial fake-out over Glenn’s apparent death, unless we see a kill directly on screen, we should probably take a character’s grisly demise with a grain of salt.

Gimple seemed to be trying to reassure fans in the episode’s closing moments, with Dwight saying “you’ll be all right” as the screen cut to black and Daryl fell, but Reedus played coy about the meaning of Dwight’s words: “Yeah, but can you trust him? You know what I mean? Who is that guy? You don’t even know who he’s saying that to, to be honest.”

Luckily, Tech Insider caught up with the actor behind the double-crossing Savior, Austin Amelio, to get his take on what happened between Dwight and Daryl in those final seconds. “He doesn’t have an intention on killing him,” Amelio explained. “He’s been through a rough patch and I think he wants to show that he means business and he knows that by shooting [Daryl] he gets his point across. I could have gone for the head. I didn’t. I went for the right shoulder. He’s not going to die. He’ll be okay.”

Amelio also confirmed that Dwight’s final line, telling Daryl he’d be all right, was added after they filmed the episode (and presumably after the internet erupted over Glenn’s dumpster dive). “It’s interesting Scott [Gimple] was so afraid that people were going to hate me so much that he actually added in a line for me at the end so I would be hated less,” Amelio told Tech Insider. “That wasn’t in the script originally. Then Scott called me up a couple weeks ago and he’s like, ‘We should put in this line at the end here because I just don’t want people hating you TOO much.’ And I was like, ‘Oh, okay. Great! Thanks, Scott. I appreciate that.'”

So Daryl’s apparently out of the woods, for now, but the preview promo for the April 3 season finale promises that “the price will be paid” for Rick and his group’s attacks against the Saviors when Negan (Jeffrey Dean Morgan) makes his long-awaited debut — so who’s going to make it out of the finale alive, and who will die at the end of Negan’s barbed wire-covered baseball bat, Lucille?

Glenn, Daryl, Michonne and Rosita have been captured by Dwight’s gang; Morgan and Carol are both out on the road alone; and “East” strongly implied that Maggie is having some kind of difficulty with her pregnancy that might necessitate a trip to Hilltop, which may be why Rick and his crew end up being stopped by the Saviors out on the road in the teaser for the finale. As star Andrew Lincoln told us earlier this season, we’re heading towards “one of the best, most appalling and brilliant season finales we’ve ever attempted. It made me physically sick when I read it, and if we’ve done it right, you will [be] too.” Which means that at this point, everyone’s a target, and as the producers like to remind us, no one is safe.

Who do you think will survive the finale, and who will be killed by Negan? Share your theories below.