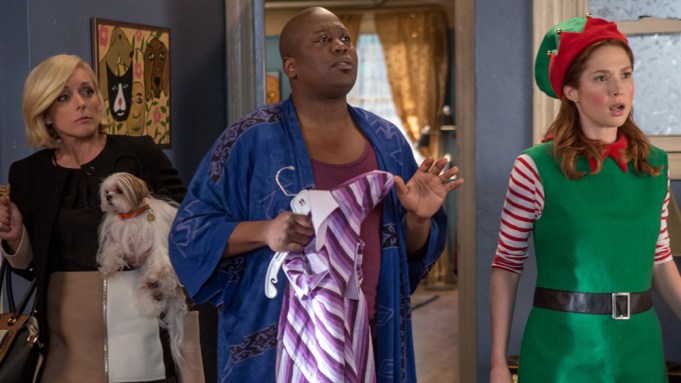 Kimmy Schmidt is back in the first trailer for season two of Netflix’s hit series “Unbreakable Kimmy Schmidt” and she’s still strong as hell.

Ellie Kemper’s title character has a new job as an elf at the Christmas Tree Store, but the same old positive outlook as she continues to get her life back on track though GED classes and awkward first encounters.

Kimmy’s former underground bunkermates aren’t as lucky. The trailer shows Gretchen (Lauren Adams), the only willing member of their cult, doing “nose candy” in an alley with an Elmo street performer, to Kimmy’s disdain.

“Did I just watch you do drugs with a junkyard Elmo?” Kimmy asks.

Kimmy’s former boss Jacqueline (Jane Krakowski) has returned to New York and is wondering, what’s “the hardest thing in the world for a trophy wife to do?” “Lose the jerk, but keep the perks. Trademark me,” she says. Meanwhile, her roommate Titus (Tituss Burgess) and landlord Lillian (Carol Kane) have started going to therapy.

The series is created by the “30 Rock” duo of Tina Fey and Robert Carlock, who serve as executive producers with Jeff Richmond, Jack Burditt and David Miner.