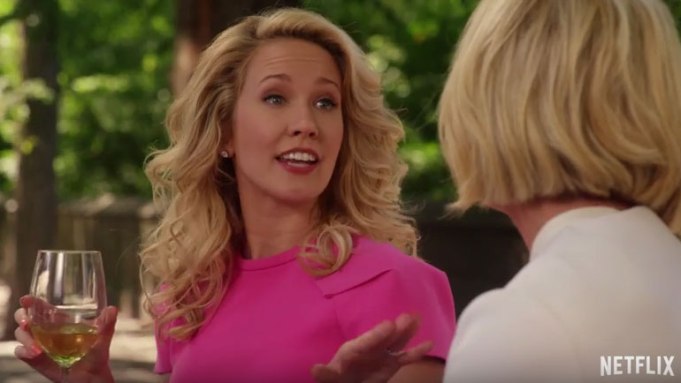 For those who wished for Jacqueline Voorhees to meet a similarly materialistic character, your wish has been granted in the form of Anna Camp.

The “Pitch Perfect” and “True Blood” star is one of the newcomers who signed on to season two of Netflix’s comedy “Unbreakable Kimmy Schmidt,” playing New York housewife Deirdre Robespierre.

In the new clip, which the streaming service released this weekend, Deirdre’s chatting with Jane Krakowski’s Jacqueline, who divorced her husband in season one. And, from the backhanded compliments Deirdre slings her way on a bench in Central Park, it doesn’t look like the healthiest relationship.

“I can never tell if you’re trying to help me or destroy me,” Jacqueline laughs. As it turns out, Deirdre’s not really sure, either.

“I have a degree in political science from Princeton, and all that wasted mental energy has to go somewhere,” Deirdre replies.

Fred Armisen, Jeff Goldblum, David Cross and “Girls” star Zosia Mamet are also set to appear in season two, along with “Kimmy Schmidt” co-creator Tina Fey. Ellie Kemper will reprise her role at the optimistic titular character, who could be seen attempting to “Kimmy-ify” New York and trying out a new job as an elf at the Christmas Tree Store in previous trailers.