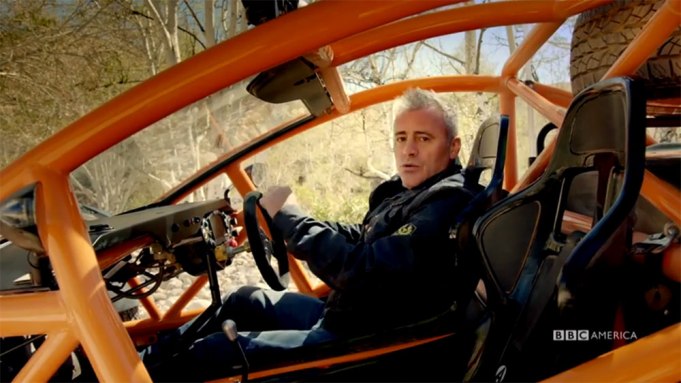 It looks like Matt Leblanc is adjusting to his new “Top Gear” role just fine.

BBC America released a new trailer for the rebooted “Top Gear” on Sunday, showing the “Friends” and “Episodes” star struggling to get into the Ariel Nomad.

“A door would’ve been nice,” Leblanc grumbles after he’s finally made his way into the driver’s seat. From there, he embarks on an intense and “fairly dusty” ride through the Moroccan desert.

Sunday’s clip is the second to be released of the new season, following a first trailer in March.

Leblanc will be joined by fellow new host Chris Evans (not the “Captain America” star), as well as German racing star Sabine Schmitz, Formula One commentator Eddie Jordan and journalists Chris Harris and Rory Reid in the next season of the long-running car show.

Previous host Jeremy Clarkson was suspended last year after a physical altercation with producer Oisin Tymon. Other presenters on the show, James May and Richard Hammond, left the show after the BBC didn’t renew Clarkson’s contract.

Leblanc was announced as one of the new hosts of the motoring show in February. It marks the first time in the show’s 39-year history that it’s had a non-British host.

The new season of “Top Gear” debuts in May.