Tom Cruise Acts Out His Film Career With James Corden 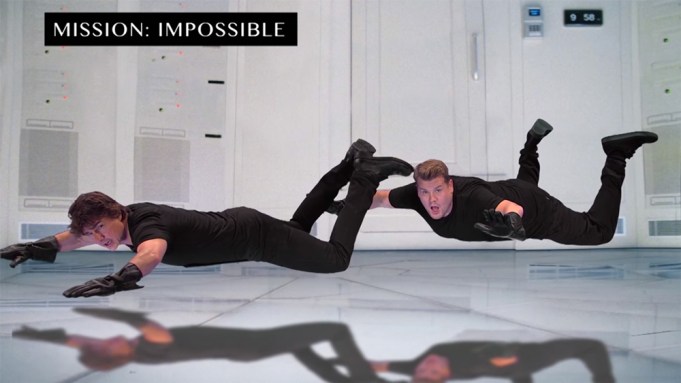 Cruise appeared on Thursday’s episode of “The Late Late Show With James Corden” in the series’ segment “Roll Call.” Along with Corden, Cruise reenacted his entire film career at lightning speed, including “Risky Business” and all five “Mission: Impossible” films.

“Are you ready?” Corden asked over the audience’s applause.

The pair began with the 1986 film “Top Gun,” both clad in green bomber jackets and aviator sunglasses. Through the progression of the segment, Cruise and Corden changed outfits, wigs, and accessories for each film. During their reenactment of the iconic “show me the money” scene from “Jerry Maguire,” Cuba Gooding Jr. appeared to set Corden straight.

“If you’re gonna do it, let me do it right,” Gooding Jr. said, before performing the scene himself. It’s been nearly 20 years since “Jerry Maguire” premiered on Dec. 6, 1996.

The pair went on to parody “Interview With a Vampire” (complete with fangs and capes), “A Few Good Men,” and “Jack Reacher.” Cruise then took the opportunity to promote the film’s sequel, “Jack Reacher: Never Go Back,” which will be released worldwide on Friday.

After a quick recap of “Edge of Tomorrow,” the segment concluded with the dance scene from “Risky Business,” complete with Cruise and Corden belting it out to Bob Seger’s “Old Time Rock and Roll.”