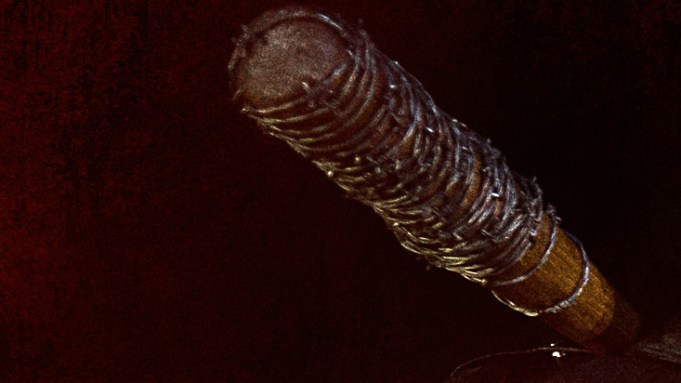 Following an ominous “Walking Dead” season finale teaser that offered our first look at Negan, AMC has released a new photo of Jeffrey Dean Morgan’s much-anticipated villain, seen here toting his beloved Lucille — a barbed wire-wrapped baseball bat that’s apparently destined to have a gruesome meeting with at least one unlucky member of Rick’s group in the April 3 season finale.

With Glenn, Michonne, Rosita and Daryl currently in the Saviors’ clutches, plus Morgan and Carol out on the road and separated from the group, there are plenty of potential victims who could die at Negan’s hand in Sunday’s episode, ominously titled “Last Day on Earth.”

When Variety spoke to Andrew Lincoln earlier this season, he described Negan as “unashamedly psychotic. He’s unapologetic about his means, his ways of getting his points across and getting things done.” As for how Negan’s leadership style might differ from Rick’s, the “Walking Dead” star would only say, “all I know is that from the comic books, he’s an incredibly funny, incredibly charming and lethal leader, and I know that we’ve got Jeffrey Dean Morgan who is all of those things … I think people will be very happy when they see his entrance.”

Get a closer look at Negan and Lucille below.