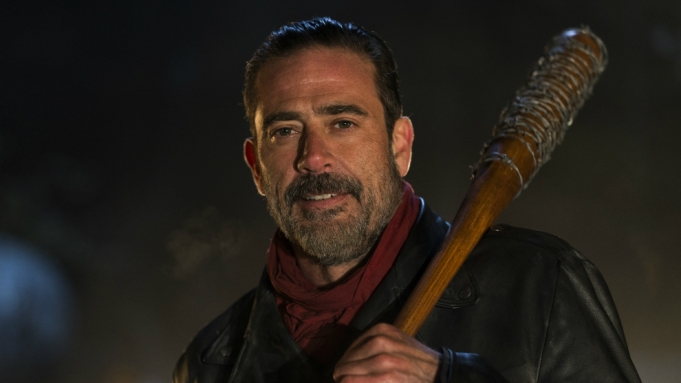 Speaking at a masterclass at the Edinburgh Intl. TV Festival, Hurd spoke about the infamous scene in the season six finale when Negan arrives with a baseball-bat wrapped in barbed-wire — dubbed “Lucille” — and kills one of the key characters. “In this new season Negan is the gamechanger, and whatever we did someone was going to be unhappy… so we promised we will be picking up where that left off; we are not going to draw it out,” Hurd said.

Hurd was accompanied on stage in Edinburgh by actor Michael Cudlitz, who joined the show in Season 4 as Sgt. Abraham Ford. Cudlitz described the Season 6 finale as “intense,” especially for Morgan, who had just come off “The Good Wife.” “As an actor every [show] you start in the middle is like the first day of school, and to have to deliver 13 pages of dialogue… and doing what he was doing was a lot of stuff to process for him.”

It was also tough for the other actors in the scene, Cudlitz said, watching the reactions of the others knowing that “all of our heroes are in peril.” He said it was also physically punishing for the actors being on their knees for eight hours and in Georgia in November, when the scene was shot, it was very cold. “It is a cold couple of nights on your knees under really sh-tty circumstances and knowing that for someone you love and care about it is their curtain-call,” he said.

Cudlitz was initially approached to join the show when it launched in 2010, and was sent a script of the pilot, which he said made an immediate impression. “I read it and remember thinking: ‘Holy sh-t, I’ve just turned 26 pages and there’s been no dialogue. We are seeing this story cinematically through this character’s eyes. We are learning about this world with no dialogue.’”

Cudlitz said he was overwhelmed by the response when he was introduced to fans at NY Comic-Con in 2013, which is available to watch on YouTube. “There was so much affection from the fans and so I put up my hand in the air and it swelled probably seven times, and there’s a look of terror on my face. ‘Oh Holy Sh-it, what the hell is going on?’ That’s part of the process. It’s like having a kid…. They say you won’t know what love is until you hold your baby… And that’s what this show is: you think you understand what it is going to be, but from the outside it can never be fully explained to you, because it is an emotional, physical thing that is shared between everybody involved in the show and the audience, and unless you are doing it you can’t understand it.”

Before the show was picked up by AMC for domestic and Fox for international, its creator Frank Darabont presented the first version of the script to NBC, with whom he had an overall deal. According to Hurd, their response was, “Do there have to be zombies [in it].” NBC then asked Darabont if the show could be a procedural in which the two main protagonists would “solve a zombie crime of the week,” she said.

Despite the obvious importance of the zombies to the show, Hurd underscored the fact that the humans are at the center of the drama. She said people new to the show were surprised that “it’s not about the zombies it’s about the humans.” Hurd said that the focus for a serialized drama such as this was on the evolution of the characters. “What attracted me to [Robert Kirkman’s] comic-book series is that it is a story about characters on a journey into this new world, and constantly trying to figure out not only how to survive but what’s important to them, and some characters give up, some characters commit suicide, and they are constantly evolving, they are constantly meeting new characters; they have to determine friend or foe, and very quickly we realize that it is not the zombies you have to be afraid of, it’s the other humans,” she said.