Watch: ‘The Simpsons’ Mocks 2016 Presidential Candidates in ‘The Debateful Eight’ 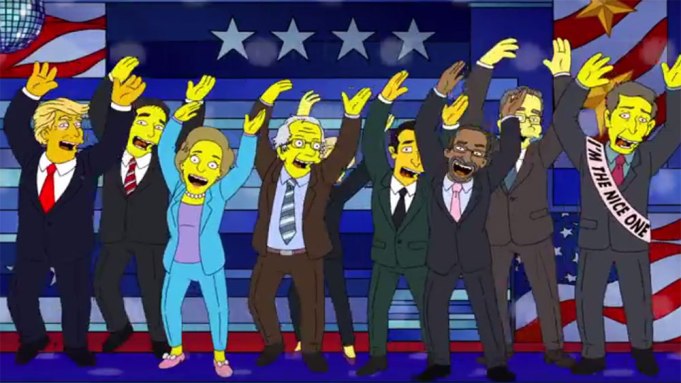 Primary season is in full swing currently, so it’s little surprise that “The Simpsons” are spoofing the 2016 candidates in a new short.

In a video released this weekend titled “The Debateful Eight,” Marge clearly can’t take the heat of primary season. She awakes from a political nightmare one night and hyperventilates into a paper bag, lamenting the lack of manners among the 2016 presidential hopefuls.

In an attempt to calm her down, Homer gives her advice to imagine an America where “Republicans, Democrats and Donald Trump all get along.” Marge does, which leads to a politics-themed rendition of “How Sweet It Is (To Be Loved by You),” fittingly taking place on a debate stage.

The number starts peacefully enough, but inevitably, it escalates quickly when the candidates start battling. No one is safe: Clinton’s ties to Goldman Sachs are mocked, while Trump (whose slick hair allows him to spin on the floor) attacks Ted Cruz’s Canadian birthplace. Even though Jeb Bush recently dropped out of the race, he can still be spotted, asking Trump, “Want to see something my mother suggested?”

In the end, it looks like Marge had a point: The real loser in the race is manners. Watch the whole sketch above.