Continue to Variety SKIP AD
You will be redirected back to your article in seconds
Jul 31, 2016 3:25pm PT

‘The Simpsons’ Cast Their Vote for Hillary Clinton (Watch) 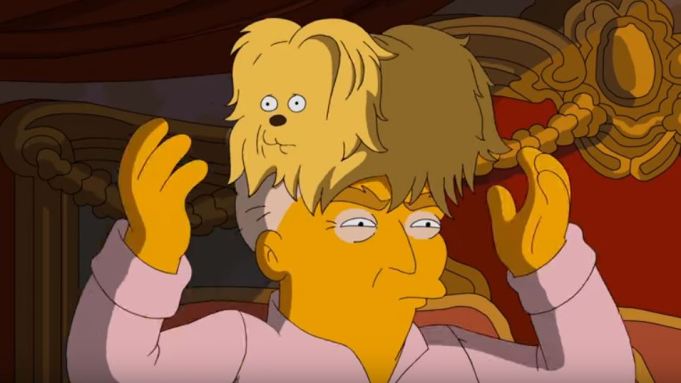 Hillary Clinton’s political campaign once famously ran an ad featuring a ringing phone at 3am, asking Americans who they wanted leading their country during a time of crisis.

Now the executive producers of “The Simpsons” have weighed in with their take in a new video — and Homer and Marge have cast their vote.

“It’s 3am and the phone’s ringing in the White House,” intones the announcer. “Whom do you want to answer that call?”

First, we see the Clintons in bed. Naturally, Bill answers the phone. “The Situation Room? I’ll be right there! Oh, it’s for you.” And he hands the phone to his wife. “Yes, from now on, it’s always for me,” says Hillary.

And then we see Donald Trump, who’s manically tweeting and reading “Great Speeches” by “A. Hitler.” “And Elizabeth Warren tweets too much. Glad I exiled her,” he tweets.

At first he declines the call from the Situation Room, but he answers when they call back: With that, he summons a troupe, who spend hours applying makeup, Botox, his tan, tiny gloves — and finally, a dog, which he plops onto his head and reassembles into his hair. “We’re too late? The Chinese fleet is advancing?” he says. “Just build another wall! Yes, in the ocean, loser.”

After viewing the ad (which is “paid for by Americans who really starting to miss Obama”) Marge says, “Fine, my mind is made up.” Homer’s still unsure, but when Marge says she questions whether she can ever be with him again, he announces: “And that’s how I became a Democrat.”