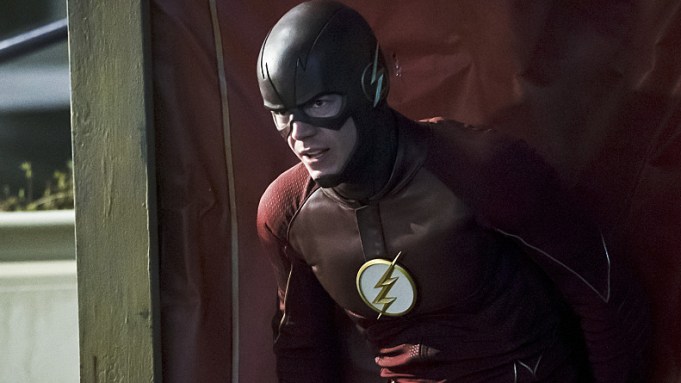 “The Flash” revealed the first trailer for Season 3 at Comic-Con on Saturday, giving fans a glimpse at the “Flashpoint” timeline, which featured plenty of differences from Barry Allen’s (Grant Gustin) original universe.

With both of Barry’s parents alive, our speedster’s relationships with Joe (Jesse L. Martin), Iris (Candice Patton), Cisco (Carlos Valdes) and Caitlin (Danielle Panabaker) are markedly altered, but perhaps the biggest change is the fact that Keiynan Lonsdale’s Wally West is now Kid Flash in the new timeline. “There’s similar qualities,” between Kid Flash and Barry’s speedster, Lonsdale said. “He’s Kid Flash, so I tried to play him with a young, lighthearted cockiness to him that can sometimes be his downfall, but he’s just in a really good place mentally; he’s never felt more sure of himself.”

One thing that hasn’t changed in Flashpoint is Barry’s encounter with the particle accelerator, meaning that he still has his powers. And, while Barry and Iris aren’t as close, since Barry didn’t grow up in Joe and Iris’ home, Barry is still confident that he and Iris will end up together. “He also knows that that conversation in the Season 2 finale still happened, as far as he remembers, his plan is ‘I’m just gonna find her and it’s gonna work out.’ Good ol’ Barry logic,” Gustin laughed.

We pick up with Barry after three months in this new timeline, and Gustin revealed, “At first Barry doesn’t realize how much has changed … when we find him, he’s living in that blind bliss [that his parents are alive] and unaware of those other changes out there.”

“I think it’s safe to say that in any timeline, Barry and Iris will ultimately find each other,” executive producer Todd Helbing reassured fans who are rooting for a long-awaited “WestAllen” relationship.

The trailer also revealed one of two new villains for Season 3. “We’re doing two big bads, one is a speedster that we’ll reveal later, and the creepy guy in the mask that we saw is Doctor Alchemy,” Todd Helbing said.

“He’s a bad dude and he’s going to be a formidable adversary to The Flash and everyone on the team,” added exec producer Aaron Helbing. He’ll be voiced by “Saw” alum Tobin Bell, best known for providing the menacing voice of Jigsaw.

The producers also promised that Flashpoint “has its ripples throughout the whole universe,” with Todd Helbing noting that “Arrow” will see the most noticeable changes. “One of the effects is with Diggle himself.” As for what those are, “you’ll have to tune in to find out.”

The shared universe between “Arrow,” “Flash,” “Legends of Tomorrow” and potentially “Supergirl” means that we can expect plenty of crossovers between the properties; the first in “Flash” Season 3 will take place early — episode 302 will see “Arrow’s” Felicity (Emily Bett Rickards) pay Central City a visit to give Barry some advice.

Season 3 will also introduce Tom Felton as Julian Dorn, a fellow CSI who’s suspicious of Barry. When asked whether we should see him as a threat, Felton laughed, “I think any character I play you should see as a threat. The first two episodes, there’s definitely some friction between Barry and Julian; he treads on the toes of Barry’s expertise. There’s some feathers ruffled fairly early on.”