‘The Flash’ Guest Director Kevin Smith Reveals What He Learned on Set, His ‘Arrow’ Aspiration 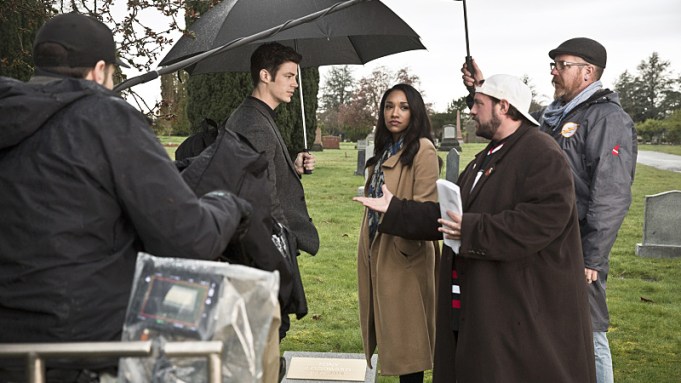 If you’re familiar with Kevin Smith’s work, you’ll know that the indie auteur is a lifelong comic book fan, with his obsessions clearly signposted in early films like “Clerks,” “Mallrats” and “Chasing Amy” all the way through to his current AMC unscripted series “Comic Book Men,” set at the comic shop Smith owns in New Jersey.

Smith has also written fan-favorite runs in comics including “Green Arrow,” “Batman” and “Daredevil,” so it was perhaps only a matter of time before the director stepped behind the camera on one of his favorite shows, The CW’s “The Flash,” which is currently racing towards its Season 2 finale. Last week’s episode ended with titular hero Barry Allen (Grant Gustin) disappearing, seemingly obliterated from existence (although fans of the character probably have a pretty good idea where he actually ended up) — which is certainly an interesting place to pick up from.

Smith has some experience directing for TV — he helmed the pilot episode of shortlived CW comedy “Reaper” back in 2007 — but stepping into an established property is markedly different from directing the first episode of a brand new series, and Smith was cognizant of those challenges when he visited “The Flash.”

“The show has its own tone and you’re coming into Season 2, so to do anything but their show is disruptive, and as a fan, I had no interest in doing my show – I can do that in my world all the time,” Smith tells Variety. “I tried to do as close as I could to my favorite episode, which is the Season 1 finale. Good news is, when I was handed Zack Stentz’s script, holy crap, it plays like a spiritual sequel to that episode; it was a gift.”

For reasons that will become clear in the episode, the hour — titled “The Runaway Dinosaur” — also features an appearance from Barry’s dearly departed mother, Nora (Michelle Harrison), which Smith says was a particular thrill for him to tackle, from a fan perspective. “When I got there and I cracked open the script and halfway through he says ‘mom,’ you’re like ‘holy s—t, man,’ because Nora Allen, for those of us who are Flash fans… scenes with his mom are like porn for a Flash fan, it’s the best stuff in the show. Heart of the show, soul of the show, meat of the show is about a boy who lost his mom; he’s doing all this because that happened … So we got to do an episode that dovetails really nicely from that season finale – you put them side by side like bookends. So suddenly, my key aim was made just that bit easier by the fact that I get to play with Nora Allen.”

The biggest source of hesitation for Smith was the special effects work, the director admits. “They have three pillars on which they’ve built that show: heart, humor and spectacle, that’s what they say – every episode’s got to have that. With those pillars, you can raise and lower them — sometimes you can have more of one or the other — but you’ve got to have all three in there. The heart and humor I knew I could handle going into it, but it was the spectacle I was always most nervous about. And the really nice thing is, I got to watch a few episodes – Armen [Kevorkian, the show’s visual effects supervisor], who directed the episode right before mine, he was working on set, so I got to go to their shoot and shoot a tail scene – the scene that’s our button on our show … we shot that on their set while they were still up and running, five days before I started my show, so I got to ease into the job a week in advance,” he recalls.

“And then they gave me the ‘Trajectory’ episode which had been cut, but none of the special effects were done, so I could actually see behind the scenes. I’m used to watching the show and watching flawless special effects as done by Armen and his team, so I got to actually see ‘oh, it’s green screen!’ and really demystify the process. I’m such an idiot – I’ve been doing this job for 22 years, but I don’t stop to go, ‘yeah, the same way they do special effects, probably how they’re gonna do it there,’ so it was nice to be able to see the strings a little bit before I went and had to make some of those strings. The good news is there aren’t too many strings, so to speak, in my episode; we don’t spend a lot of time in the effects world or on green screen with this episode, although the whole episode feels like, because of the setting, one big special effect.”

Smith describes “The Runaway Dinosaur” as “my favorite thing I’ve ever directed,” in part because of the collaboration between himself and the show’s cast and crew up in Vancouver. “I didn’t go in and be like ‘let me show you how Kevin Smith does things’ – I was like, ‘please show me how you do things every week,’ and in doing so, I became a better filmmaker,” he says. “In the course of eight days on ‘Flash,’ I know I became a better director … and I think a lot of that had to do with the fact that I did not get to write it, I did not edit it. All I had to do was focus on just directing.”

It should come as no surprise, then, that Smith has already signed on to direct another episode of “The Flash” for Season 3, which is tentatively scheduled to film in August. “By day 3 on that show, I was like, ‘I’d do this every damn day if I could.’ Lots of the folks that I was working with were like, ‘you have to come back.’ So when we were done with the episode, most of the crew on the production side, the Berlanti folks, had seen all the dailies and they liked them and heard from the cast and crew that they liked me; I was very enthusiastic. So they started talking early on. Greg [Berlanti] sent me an email – ‘any show you want to come play in, you’re welcome here; consider this a second home,'” Smith recalls. “The one thing I asked was ‘just make sure it’s the same crew,’ because they alternate between two crews because they shoot so many episodes, and the folks that I bonded with, the folks that I worked with, they made that show what it is. It’s a great episode and I give them all the credit. So if I am going to go back, I just want to make sure I’m with them again so they cover my ass and make me look good again.”

Despite a career spent directing, writing and editing his own work, Smith says he’d prefer to stick to directing on “The Flash,” eschewing the possibility of penning an installment of the show. “I prefer not writing the episode because what we were able to do with me not writing it was, at least for me, substantial and wonderful … just as a directing exercise, I was so happy with it,” he says. “So I wouldn’t want to write on ‘Flash.’ I would, though, like to write on ‘Arrow.'”

Smith is well-versed in the world of Oliver Queen, having written two critically acclaimed runs on the comic in the early aughts — “Quiver” and “The Sounds of Violence,” the latter of which introduced an iconic villain that he’s itching to adapt for “The Flash’s” sister show. “I would love to jump in for a one or two episode arc just to bring that Onomatopoeia character to life. That would be so badass – I created this character in the comics and then to do a live-action version of it that fit into their universe, fit into the run of their show? That would be exciting to me,” Smith tells Variety. “That’s the one I can get my head around writing, but ‘Flash,’ whenever they bring me back, I think I prefer somebody else doing it. I heard rumor that when I go back, I think Zack [Stentz] might be writing my script again, which would be amazing – we’d be keeping the home team together, so that’d be cool.”

Smith describes this week’s installment as “the calm before the storm” of the final two episodes of Season 2. “While you’re shooting your episodes, they do breakdowns of the next episodes that they give the crew ahead of time so they know what they’re thinking about, so I saw what was happening in the episode after mine and I got jealous, because the tail end of the episode after mine, that’s like jaw-droppingly huge in the world of ‘Flash,’ it’s massive,” the director teases. “That leads into the season finale. I remember when the breakdown came through, my crew, which was episode 21, they were gonna be on that show, episode 23, and Lexi [La Roche], who’s the script supervisor – I said, ‘how is it, what does 23 look like?’ And she says, ‘it looks like we’re making a movie, it’s massive.’ So our episode is the calm before the storm that reenergizes Barry and sends him out for the last two. This is the Barry meets his maker episode, more or less; the hero reborn, the hero discovered.”

The episode may be the precursor to a storm, but Smith says “The Runaway Dinosaur” will still be an emotional rollercoaster. “As we were making it, I was like, ‘you understand right now, we’re slicing open the chest of the viewer, pulling their heart out and dining on it? We’re eating their hearts, because you know they’re gonna be bawling in this moment.’ It was great, it was what we all swung for. I kept joking with them all the time, cause shows like ‘Flash,’ sadly, don’t get acknowledged by awards people, but every time we were going into a take, particularly for the emotional stuff, I was like ‘Remember, folks, this is for an Emmy, we can definitely do it! This is for a Golden Globe!’ then I took it to Oscars, ‘f—k it, we’re setting the bar too low, we’re gonna win an Oscar with this episode, with how strong it is.'”