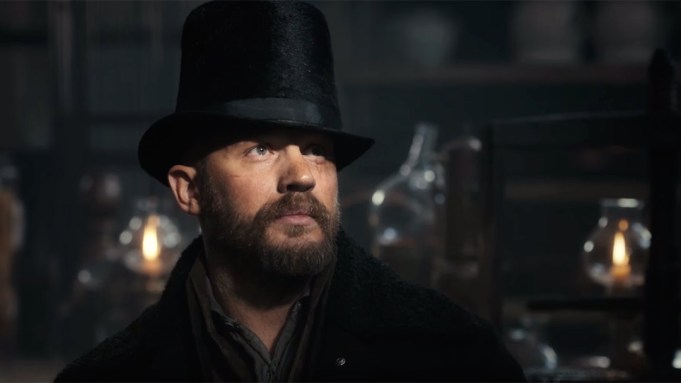 FX has released the first trailer for Tom Hardy’s new drama series, “Taboo.” The British thesp stars and exec produces with Ridley Scott and Steven Knight, who created the eight-episode show, based on an original idea by Hardy and his father Chips Hardy, who also serves as consulting producer. The series is a co-production between FX and BBC One.

Set in 1814, “Taboo” follows James Keziah Delaney (Hardy), a man who has been to the ends of the earth and comes back irrevocably changed. Believed to be long dead, he returns home to London from Africa to inherit what is left of his father’s shipping empire and rebuild a life for himself. But his father’s legacy is a poisoned chalice, and with enemies lurking in every dark corner, James must navigate increasingly complex territories to avoid his own death sentence. A dark family mystery unfolds in a combustible tale of love and treachery.

Scott’s production banner Scott Free London and Tom Hardy’s Hardy Son & Baker are producing for FX and BBC One, with Sonar Entertainment distributing worldwide outside the U.K. Executive producers are Scott and Kate Crowe for Scott Free, Hardy and Dean Baker for Hardy Son & Baker, and Knight, with Timothy Bricknell producing. The series is directed by Kristoffer Nyholm.

Hardy and Knight previously collaborated on critically acclaimed film “Locke” and BBC Two drama “Peaky Blinders,” which streams on Netflix in the U.S.

In addition to his work in “The Revenant,” for which he earned an Oscar nomination for best supporting actor, Hardy played the lead role in the Oscar-nominated “Mad Max: Fury Road.” Scott’s “The Martian” is nominated for seven Oscars, including best picture.