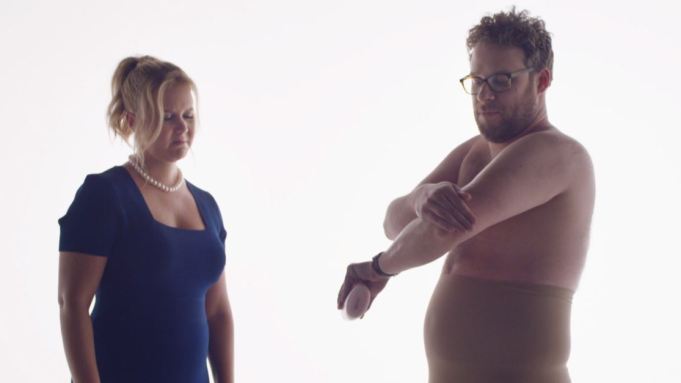 Though the country is divided politically, Bud Light is hoping to unite everyone under one banner held by Amy Schumer and Seth Rogen.

The beer brand has released a short teaser for its new campaign set to debut during the Super Bowl. The ad shows Schumer and Rogen preparing for a rally, including shots of Rogen squeezing into pantyhose and powdering himself. The two are running as candidates of the “Bud Light Party.” Michael Pena will also appear in the commercial with more celebrities, such as UFC fighter Ronda Rousey, who are expected to join the ads later this year.

“This is more than just a Super Bowl ad,” Bud Light VP Alexander Lambrecht said in a statement. “It’s a completely new communication of what Bud Light stands for – inclusivity, positivity and fun.”

Anheuser-Busch plans to air three-and-a-half minutes of commercials. According to CBS, 30-second spots are selling for as much as $5 million this year. Not only is Anheuser-Busch the only beer advertiser in the game, but Bud Light is the official beer of the NFL.

This new campaign will also include a package redesign. New tagline “Raise one to right now” will replace the previous slogan, “Up for Whatever.”