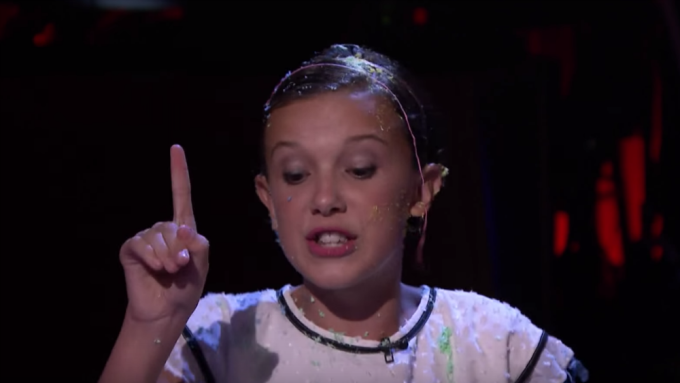 The kids of the hit Netflix series “Stranger Things” are anything but strange. In fact, they’re just like us.

Millie Bobby Brown, Gaten Matarazzo, Caleb McLaughlin and Finn Wolfhard all appeared on “The Tonight Show Starring Jimmy Fallon” Wednesday evening. While on the show, the kids and Fallon did everything from enacting a fake scene to spraying each other repeatedly with silly string.

While playing “Stranger Strings,” where each took turns reading random yet unknown facts about each other (then spraying silly string on who they think wrote the fact), it was revealed that Brown can can immaculately rap Nicki Minaj’s verse from Kanye West’s “Monster.” The rap begins at the 4:15 mark.

Though Brown’s rap performance may have been one of the most surprising elements of the soft-spoken Brit, most of the kids are, in fact, incredible singers. Before “Stranger Things,” McLaughlin had a brief stint in the Broadway musical “The Lion King” in 2012. In another YouTube video now going viral, Matarazzo can be heard singing “Bring Him Home” from “Les Misérables.” Even Joe Keery (the heartthrob Steve Harrington) is the drummer of the band Post Animal. Very strange, indeed.

“Stranger Things” is scheduled to return for a second season in 2017.