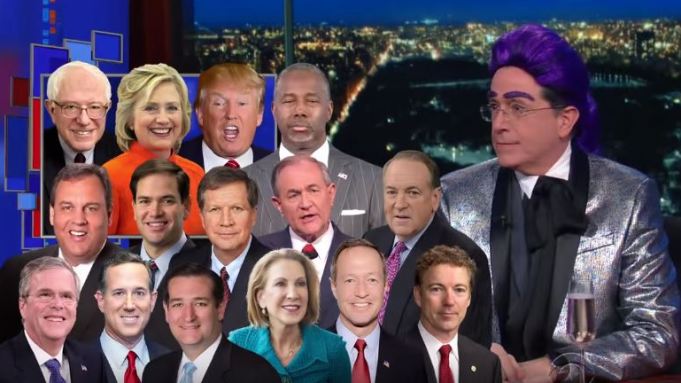 In a reprisal of his “Hungry for Power Games” spoof segment, Stephen Colbert provided commentary on post-Iowa caucus election changes Wednesday night on “The Late Show With Stephen Colbert.”

“Being a candidate can’t be a picnic,” said Colbert. “It’s so cutthroat and heartless. It’s like the ‘Hunger Games.’ No, it’s more than that. It’s the ‘Hungry for Power Games.'”

Dressed as “Hunger Games'” host Caesar Flickerman (played in the films by Stanley Tucci) with champagne in hand, Colbert paid tribute to Rand Paul, Martin O’Malley and Mike Huckabee —  all three of whom announced the end of their presidential campaigns following the results of the Iowa caucus.

“There has been a bloodbath in Iowa’s cornucopia, an unprecedented harvest of brave tributes,” Colbert announced before acknowledging each “fallen” candidate. “Let us now bid farewell to those who have fallen, for the rest your time in the political arena is over.”

“If you lined those people up from end to end, it would be easy, because there are only 12 of them,” Colbert said. “Keep this in mind. He only got 12 votes. That is less — and this is true, we looked it up — than the number of people in Iowa named Jim Gilmore.”