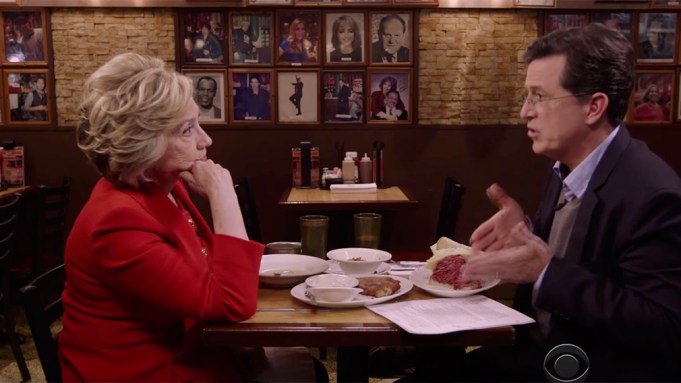 The late-night host dined with Democratic presidential candidate Hillary Clinton at the famed Carnegie Deli in Manhattan, where the pair engaged in a primarily food-focused conversation and Colbert presented Clinton with an impression of the former president.

“I know that former president Clinton, your husband, is a vegan. Is he going to give you any grief on this, any friction for you eating meat?” Colbert asks Secretary Clinton. “He never says, like, ‘That sandwich had a face. That sandwich is somebody’s little baby,’ nothing like that?” to which Clinton clarified that her husband is an “open-minded vegan.”

After prodding Clinton about Donald Trump, he circled the discussion back to her husband and broke out the impression a second time.

“How’s my impression, by the way?” Colbert asked Clinton. “Is it spooky? If you close your eyes, you don’t know, maybe he’s here?”

Watch a recap of the dinner date above.