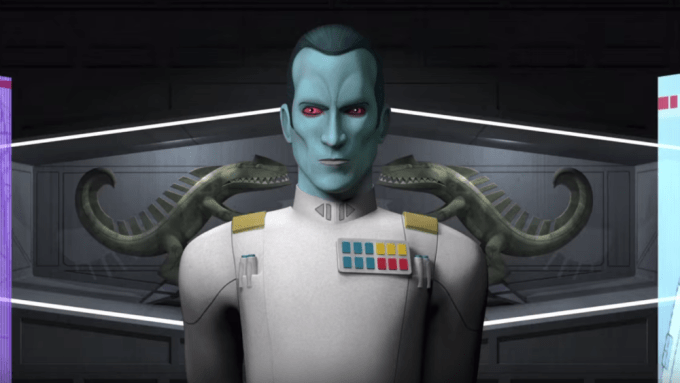 “Governor Price, these Rebels have proven particularly stubborn. How do you intend to solve this problem?” asks Grand Moff Tarkin in the trailer. Price replies, “I need someone who sees a bigger picture.”

That someone is Thrawn, a blue-skinned humanoid with glowing red eyes. He will be voiced by Lars Mikkelsen, brother of Madds Mikkelsen, who is cast in “Rogue One.”

Executive producer of the Disney XD animated show Dave Filoni revealed that the fan favorite was “one of the most challenging characters we ever had to cast.” He added during the panel, “We knew you wanted it and we wanted it too. Thrawn is back!”

Zahn joined the panel over video to reveal that he is finishing a new novel featuring the character, titled “Thrawn.” It will be released in April, 2017.

Star Wars tweeted about the reveal by quoting Filoni, “Let’s just expand the universe, shall we?” The account also tweeted, “Welcome to #StarWarsRebels, Grand Admiral Thrawn.”

On Friday, the Star Wars Celebration released new footage and a poster for “Rogue One: A Star Wars Story.”