‘Shameless’ EP Nancy Pimental on Showing Another Side of Teen Pregnancy 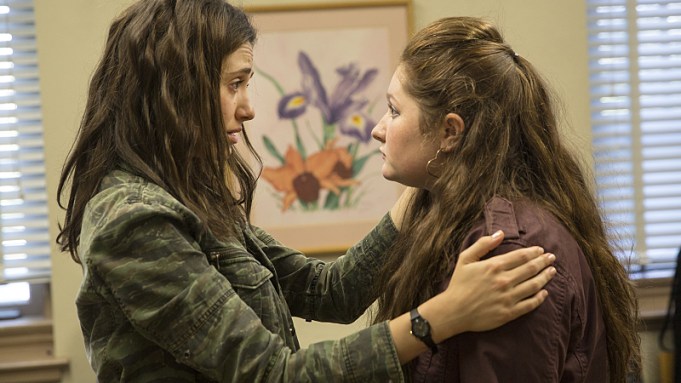 Spoilers: Do not read this interview unless you and watched the first episode of the new season of “Shameless,” which is in the above video player.

Showtime’s “Shameless” returns for its sixth season on Jan. 10, bringing with it a whole new season of raunch and absurdity mixed with high-class wordplay and serious and topical social issues as the Gallaghers of Chicago’s South Side find unique ways to survive.

The first episode of the new season was released early on digital outlets. While it does mark the return of Ethan Cutkosky’s Carl (I’m sorry — White Carl) emerging from juvie as a changed man and continues to explore Fiona’s (Emmy Rossum) and Lip’s (Jeremy Allen White) messed-up dating lives, the new episode suggests that this year will focus on high schooler Debbie Gallagher (Emma Kenney) and the news that she is pregnant.

Ahead of the show’s premiere on Showtime, “Shameless” showrunner and exec producer Nancy Pimental talked to Variety about Debbie’s storyline as well as others that will be plaguing the Gallaghers this season.

“Shameless” frequently will concentrate on a central character or theme, whether it’s Fiona’s downward spiral or Ian’s (Cameron Monaghan) battles with mental disorder. This season, it seems you’re concentrating on, well, teen pregnancy.

(Laughs) Yes we have.

Every year, our aspiration is to take on something in a way that’s different from what we’ve seen on television before or that’s in the zeitgeist or in the culture.

We wanted to have it be more than “oh my god, it’s a drag and your life is ruined” — and we certainly have that point of view with Fiona — but we really wanted to show the point of view with Debbie that it’s actually really empowering for her. It’s a choice. She made this choice. She doesn’t understand why people aren’t on board with this choice and that she can do it. It’s a strong woman’s choice.

She feels like, in the area that she lives, this is a good goal to have. Family is really important to her. Maybe other people have other goals for her, but this is what she wants. She has an opportunity to reinvent herself.

It comes at such an interesting time, given the U.S. House of Representatives’ bill to defund Planned Parenthood. And “Scandal” has done an abortion episode this season.

In some ways, we don’t think we’re being so risky and controversial. We just feel like there’s different sides to every story and when we’re writing, we feel like we’re in our own little bubble. We’re not sitting there going “Oh, we’re on the cutting-edge here.” There’s other sides of the topic that haven’t been explored. To have each person take on a different point of view, especially points of view that haven’t been explored, is what’s important.

We’re not wagging the dog. I think it’s just coincidental with what’s going on.

You’re also carrying on with the theme of gentrification, something that was brought up last season.

We thought that we should definitely keep it alive because it certainly is what is happening in lots of big cities in the country. Gentrifiers are pushing into areas that you never thought that they would. We’re figuring out what to explore for our family … how does that affect the neighborhood?

It’s so funny too, because we were like, “What exactly defines a hipster?” We were making fun of this one guy … “Yeah, you are because you’re coming in with that weird coffee drink that’s made with butter in your little jelly jar.”

”Shameless” is one of several well-written dark comedies on television now. How do you think the scripted comedy world is changing?

I think it’s becoming more real. I think people are making comedy out of tragedy more. People aren’t afraid to take on topics that you might not have seen in the past. Everyone’s representing “All in the Family” in a way.