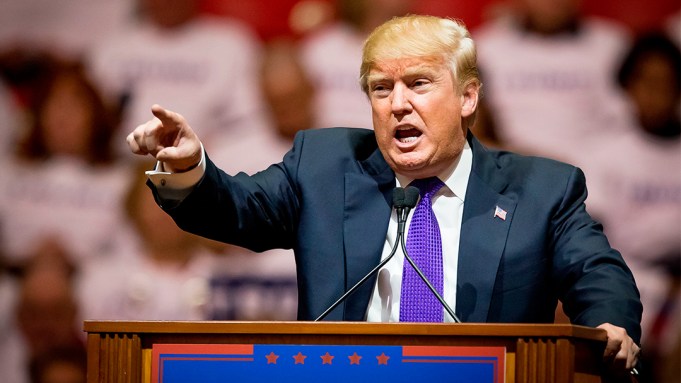 NBC may have been Donald Trump’s one-time reality TV home, but Seth Meyers is banning the presumptive Republican presidential nominee from his talk show on the Peacock Network.

The “Late Night” host cheekily made the annocment on Tuesday night in response to Trump revoking the Washington Post’s press credentials after complaining about a headline. The paper reported that Trump had suggested President Barack Obama sympathized with terrorists after not using the phrase “radical Islam” in response to Sunday’s Orlando shooting.

Meyers said the ban would hold as long as the Post was blocked from Trump’s campaign events.

“Sure, Trump didn’t explicitly say it,” Meyers said. “He implied it with all the subtlety of an eighth grader’s cologne.”

“But Trump’s vague innuendo is no accident. This is a strategy he uses to try to appeal to the outer fringes while also avoiding accountability.”

“To be clear, this is bigotry, plain and simple,” he said. “To claim that any group of people — immigrants or anyone else — has anything in common with a terrorist murderer simply based on their ethnic background or religion … is dangerous and wrong.”

Trump was set to make a “Late Night” appearance at one point, but backed out “not for any reason outside the normal campaign reasons,” Meyers told Variety in April. “I wouldn’t want to put myself in Donald Trump’s head, mostly for lack of synonyms.”

“I think at this point, we are perfectly satisfied with not having him on,” Meyers told us.