Sean Penn on ‘El Chapo’ Meeting: ‘My Article Has Failed’ 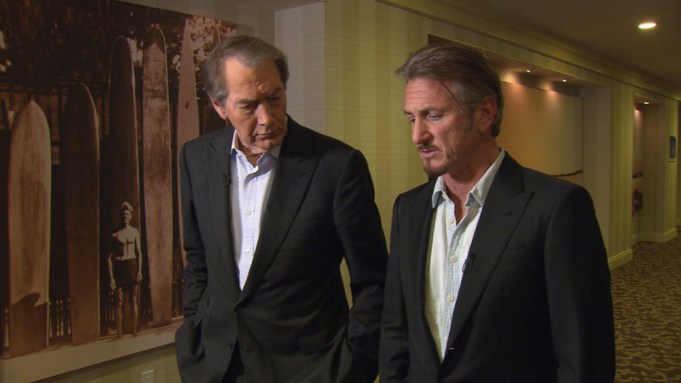 “Let me be clear. My article has failed,”  the actor told Charlie Rose in an excerpt of a “60 Minutes” interview that aired Friday on “CBS This Morning.” The story will air in its entirety on Sunday.

Penn conducted an interview with the drug kingpin months ago during which they discussed producing a film about his life. Rolling Stone published the actor’s firsthand account after Guzman was captured by authorities on Jan. 8.

“There is this myth about the visit that we made, my colleagues and I with El Chapo, that it was — as the Attorney General of Mexico is quoted — ‘essential’ to his capture,” Penn said. “We had met with him many weeks earlier … on October 2nd, in a place nowhere near where he was captured.”

Penn said the Mexican government has made him a scapegoat and a target of the cartel. His initial intent was to use the meeting to initiate dialogue about the war on drugs.

He said Guzman was captured months after his meeting — arranged by Mexican actress Kate Del Castillo — and in a completely different location.

He also implied that the reporters questioning his journalistic ethics are jealous of his experience.

“When you get the story that every journalist in the world wanted, there’s a lot of green-eyed monsters who gonna come give you a kiss,” Penn said.

Penn added that he has “a terrible regret.”

“The entire discussion abut this article ignores its purpose which was to try to contribute to this discussion about the policy to the war on drugs,” Penn told Rose.

“Let’s go to the big picture of what we all want. We all want this drug problem to stop. We all want them — the killings in Chicago to stop,” Penn added. “We are the consumer. Whether you agree with Sean Penn or not, there is a complicity there. And if you are in the moral right, or on the far left, just as many of your children are doing these drugs … And how much time have they spent in the last week since this article come [sic] out, talking about that? One percent? I think that’d be generous.”