Watch: Olivia and Jake Are Back On in ‘Scandal’ Season 5 Midseason Premiere 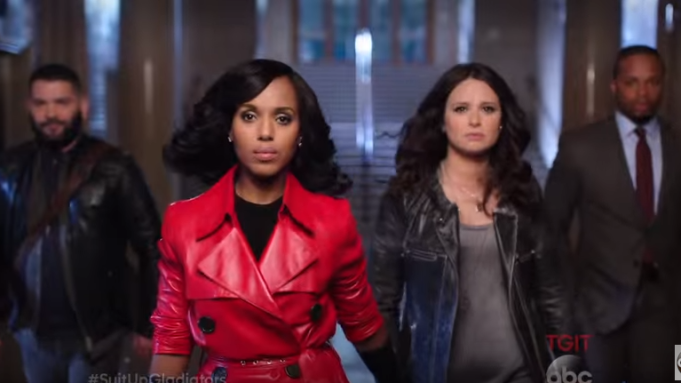 The white hat is off.  When “Scandal” returns with the second half of its fifth season on Feb. 11, Olivia Pope (Kerry Washington) is a whole new woman.

Following the midseason finale’s abortion shocker, Olivia — who’s no longer with Fitz — is all fired up and back in action.

On the romance side, Jake (Scott Foley) tells Olivia, “I don’t like waiting” to which she replies, “Then don’t,” proceeding to jump into his arms for a full-blown make out session. Meanwhile, Fitz (Tony Goldwyn) is all alone in the Oval Office and when Abby (Darby Stanchfield) asks Olivia if she misses the president, she says no. However, by the end of the video, Liv phones into the White House.

The trailer also speaks to “Scandal” fans who are ready to get back on Twitter for Thursday night #TGIT trending. With the hashtag #SuitUpGladiators promoted in the video, the voiceover teases, “Say hello to a whole new jam … It’s time for your jaw to get re-acquainted with the floor.”

Earlier this month at the Television Critics Association in Pasadena, Calif., Goldwyn spoke to Variety about Fitz and Olivia’s estrangement, teasing that the duo will be in bad shape when the new episodes return — and Fitz is truly down in the dumps. He also noted that Fitz does not know about Olivia’s abortion and if and when he finds out, he would be heartbroken.

.@tonygoldwyn says Olivia/Fitz are estranged when #Scandal is back & will be for a while. He thinks it’s real this time #TCA16

More #Scandal bits from @tonygoldwyn: Fitz does not know about abortion & no plans yet for him to find out (at least in scripts he’s read!)

“Scandal” returns Feb. 11 at 9 p.m., along with the “TGIT” premieres of “Grey’s Anatomy” and “How To Get Away With Murder.” To watch the new trailers for those two shows, click here and here.