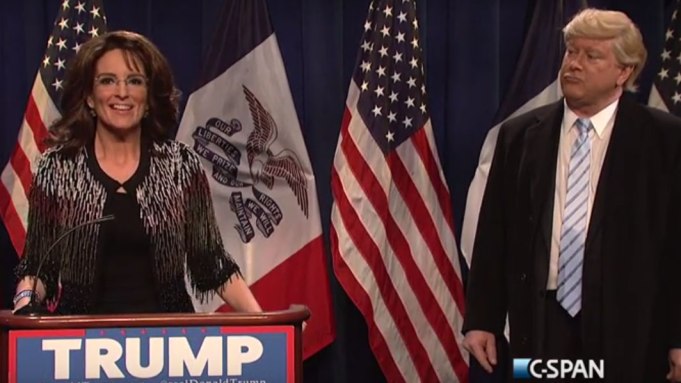 Given Sarah Palin’s endorsement of Donald Trump this week, it was inevitable that Tina Fey would make a return appearance to “Saturday Night Live.” And she didn’t disappoint.

The cold open featured Fey offering her take on the Alaska governor’s idiosyncratic speech patterns — while Darrell Hammond as Trump looked on in horror.

“I wanted to take a break from my full-time career of writing things on Facebook to fly down here and lend my support to the next president of the United States, Donald J. Trump,” Fey’s Palin said.

Hammond’s Trump interrupted her at every turn, getting increasingly concerned as her speech unraveled.

“I’m here because we Americans are struggling,” said Fey’s Palin. “So many of us have lost our jobs at the factory or our reality show about Alaska. We’ve seen our children targeted by the police for no reason, other than they’ve committed some crime.”

“I’m here for all you teachers and teamsters, you farmers and charmers, whether you’re a mom or two broke girls or three men and a baby or a rockin’ roller, holy roller pushin’ stroller, pro bowler with an abscessed molar,” she said.

Said Hammond as Trump: “I hope nobody’s allergic to nuts, because we got a big one here. She’s two Corinthians short of a Bible. And is it just me, or does everything she say sound kind of dirty?”

Palin got in the last word with a wink to the camera: “Guess what America, I don’t think this guy should really be president! I’m just here ’cause he promised me a spot in his Cabinet. I belong in a cabinet because I’m full of spice, and I’ve got a great rack.”

It was also announced during the show that Larry David will host on Feb. 6. Although he’s made frequent appearances, most recently as presidential candidate Bernie Sanders, this will be his first time as the host. David wrote for the show in the mid-1980s.

We'll see you on February 6. We invited Larry David and @the1975, too. Hope that's okay. #SNL pic.twitter.com/hAZOYtdz3x