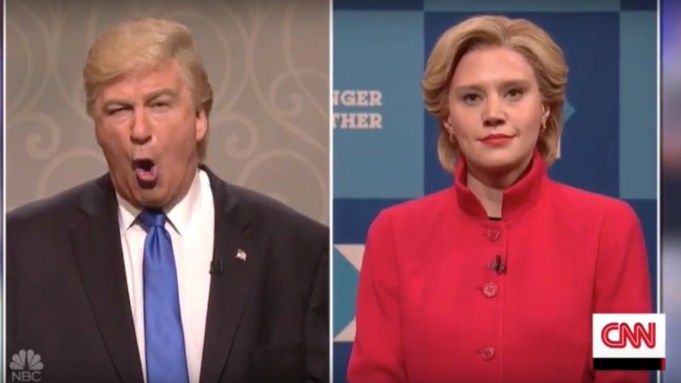 In their last outing on “Saturday Night Live” before the election, Kate McKinnon and Alec Baldwin used the cold open to mock the candidates one final time — and urge viewers to vote.

The segment began as a parody of Erin Burnett’s CNN show “OutFront” with Cecily Strong playing the news anchor, grilling the candidates on the tightening race.

“It might be the bottom of the ninth and it’s tied and it’s raining, but this old Chicago Cub is still gonna bring it home,” said McKinnon-as-Clinton.

Much to Clinton’s chagrin (“Please be his taxes,” she begged), Burnett brought up the big story of the week: Clinton’s emails.

Burnett said, “Mr. Trump, everyone can see your tweets.” A surprised Trump replied, “Really? And I’m still in this thing? America, you must really hate this lady.”

Clinton grew ever more frustrated as Trump cozied up to the FBI, Putin, even the Ku Klux Klan — kissing them on the lips.

She counted off a long list of things that Trump has single-handedly ruined that “we as Americans hold dear”: “kindness, decency, Tic Tacs, Skittles, taco bowls, father/daughter dances, the word great, the color orange, men.”

“In four years once you all realize you’ve been tricked, you’re going to come running back to me, begging me to run again,” said Clinton. “And guess what, idiots? I’ll do it.”

Baldwin and McKinnon then broke character, stepping back to reveal the SNL stage. “I’m sorry, Kate, I just hate yelling all this stuff at you like this,” said Baldwin. Added McKinnon, “I know right. This whole election has been so mean.”

“You know what I think can help us?” said McKinnon. “Let’s get out of here.” The pair then ran through the streets of Manhattan, holding hands and hugging passersby (even someone wearing a “Trump that b–h” shirt), sharing a pretzel and cotton candy, joining in a ring dance.

They regrouped back on the “Saturday Night Live” with a message for viewers to vote: “Now it’s time to get to out out there and vote,” said Baldwin. “None if this will have mattered if you don’t vote.”

“We won’t tell you who to vote for,” said McKinnon. “But on Tuesday, we all get to choose what kind of country we want to live in.”