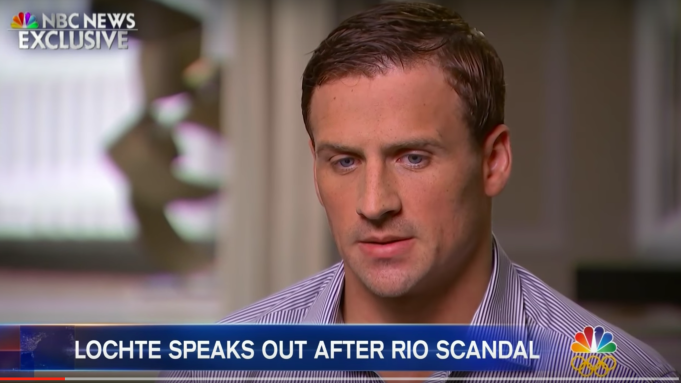 UPDATED: Olympic medalist Ryan Lochte has finally spoken out in the wake of the scandal in Rio, where he and his teammates claimed to have been robbed and held at gunpoint.

“I’m taking full responsibility for it,” he told NBC’s Matt Lauer. “I over-exaggerated that story. If I’d never done that, we wouldn’t be in this mess. … It was my immature behavior.”

Asked point-blank if he was robbed, Lochte responded, “I can’t answer that because I don’t know. … I was intoxicated, so all I know is there was gun pointed at us, and we were demanded to give money.”

Lochte had originally claimed that he and three teammates — James Feigen, Jack Conger, and Gunnar Bentz — were robbed in a taxi while heading to the Olympic Village by two men with guns and badges. But Brazilian police said the swimmers had instead vandalized a gas station bathroom and gotten into a confrontation with an armed security guard.

Lauer asked Lochte why he said he’d been a “victim.”

“It’s how you want to make it look like,” Lochte said. “Whether you call it a robbery, whether you call it extortion, or us paying just for the damages, like, we don’t know. All we know is that there was a gun pointed in our direction, and we were demanded to give money.”

Lauer pressed Lochte on his understanding of the original situation at the gas station, given that there was a translator present.

When asked by Lauer how it felt to watch news coverage of his teammates removed from their flight back to the U.S. by Brazilian police while he was safe at home, Lochte teared up.

“Hurt, I let my team down,” he said. “I wanted to be there. I don’t want them to think that I left, and left them dry. … I wanted to definitely be there. I wanted to help out any way I could. I just wanted to make sure they were home safe before I came out and talked.”

“I’m just really sorry,” Lochte added. “I’m embarrassed for myself, my family, those guys, USA swimming, the Olympic games, everyone watching. I was immature and I made a stupid mistake. I’m human, I made a mistake, and I definitely learned from this.”

Lochte issued an apology for the incident on Friday, saying he was sorry for not being more “careful and candid.”

Watch excerpts from the interview below: