Rachel Bloom and Billy Eichner on Navigating ‘Newfound Fame,’ Creating Their Own Work 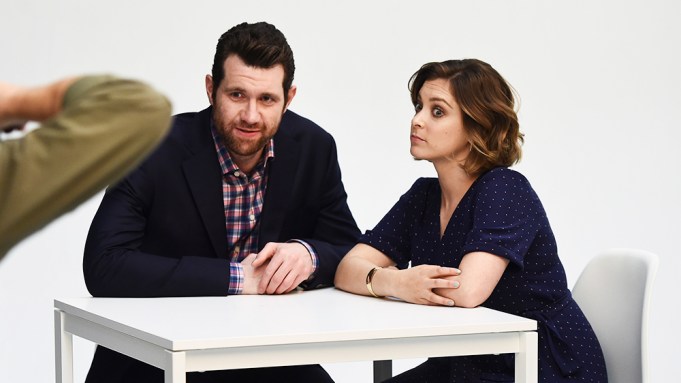 Rachel Bloom of “Crazy Ex-Girlfriend” and Billy Eichner of “Billy on the Street” had a similar start — by doing it on their own. They both know what it’s like to have to “beg people to notice,” as Bloom puts it during the fourth season of Variety and PBS’ “Actors on Actors” series. Both comedians started in sketch comedy and transitioned into primetime roles, but how have they handled this newfound recognition?

“I’m fine with it, no problem,” Eichner said.

He credits much of his success to social media, saying he wouldn’t have had a career if it wasn’t for Facebook and Twitter.

“That’s how people shared my videos and that’s how I got the attention of people in the industry who I think always liked me but were a little scared, didn’t know where I fit in,” he said.

“Here’s where I fit in: 500 thousand people just watched my video and all these people are from all over the country and all over the world. It’s not my little niche in New York, so how are you going to tell me I’m not valid?” he added.

Part of what led Bloom to write was the frustration of not finding the right roles. She felt limited by the “ingenue” and “brassy best friend” types that dominate musical theater — a background both she and Eichner share.

“I can’t find a decent comedy audition song that really fits who I am and what I want to say, that wasn’t written before like 1962, where all the jokes were about Rolodexes and Ovaltine,” she said. “So I think that that frustration with musical theater not giving me what I wanted drove me to write my own material.”

Although it took some time for Eichner to reach roles in “Parks and Recreation” and “Difficult People” and success with “Billy on the Street,” he is thankful that he found success as an adult instead of as a “child.”

“I think that can be hard to navigate, no matter how smart you are. So I’m glad that things started to really happen when I was in my mid-30s when I could appreciate it, when I had paid some dues and I wasn’t an idiot,” said Eichner.

The two-part fourth season premiere of “Variety Studio: Actors on Actors” airs June 12 and June 19 on PBS SoCal. Presented by Shopbop/East Dane, the episodes will also be available to stream on Variety.com.