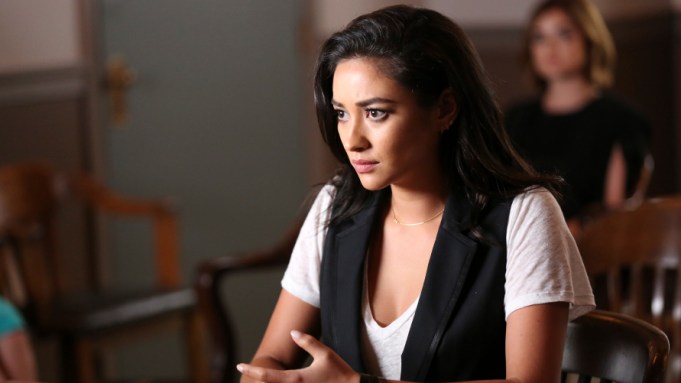 “Pretty Little Liars” returns on Jan. 12 and it’s a whole new world in Rosewood, as the show kicks off after a five-year time jump.

The liars are brought back to Rosewood in the new episodes, after Alison (Sasha Pieterse) asks the girls to return to town for Charlotte’s (Vanessa Ray) court hearing. Emily (Shay Mitchell) returns to her old stomping grounds, arriving at her parents’ home after her father’s death, which occurred sometime over the past five years.

In the exclusive clip (above) Emily — who dropped out of Pepperdine University after her father died, and has been living in California working as a bartender, since viewers last saw her — visits her mother and asks about Greg, who it seems, is safe to assume is her mom’s new boyfriend.

“We’re taking a little break. … It was just time for a break,” Ms. Fields says, clearly upsetting Emily, who then touches a flag displayed in the window of the Fields home, honoring her late father.

During the “5 Years Forward” special in late 2015, “Pretty Little Liars” creator Marlene King revealed that Emily comes back with the biggest secret of all the liars.

“She really has two secrets. One of the secrets informs the other,” King told Variety in a recent interview. “Over the course of the time jump, her father passes away unexpectedly and she will have a really difficult time dealing with that.”

As for Emily’s love life in the second half of season six, King teases that she has “a sprinkling” of a love interest in the new episodes.